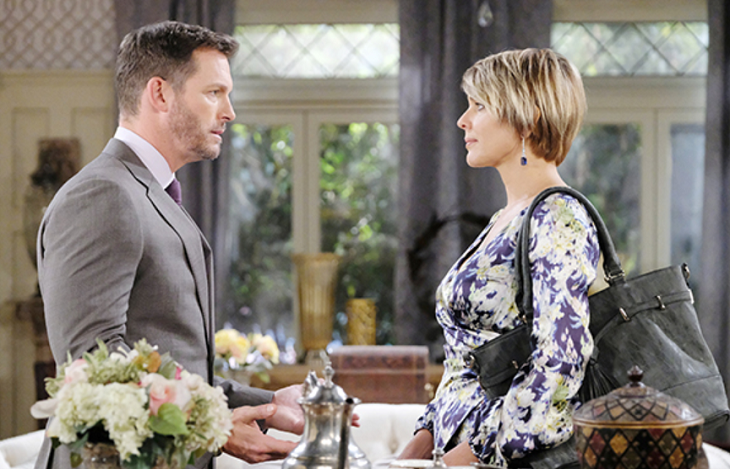 Days of Our Lives Xander Cook (Paul Telfer) shows up at Eve Deveraux’s (Kassie DePaiva) door to see if Jack Deveraux (Matthew Ashford) took the fake serum he helped her to get. Xander tells Eve how desperate she was last night and how charming it was.

Eve threatens to put Xander in jail if he didn’t replace the serum. Xander has brought Eve the real serum as well. Eve wants Xander to take the serum and leaves. She hopes after a couple doses Jack will stop trying to get his memory back.

Eve tells Xander she doesn’t want Jack to leave her for Jennifer. Xander brings up Sarah Horton Brady (Linsey Godfrey) and Eve throws him out. Eve rips up Dr. Rolf’s (William Utay) diary and sets it on fire. Jack walks in and demands to know what Eve is doing.

Days Of Our Lives Spoilers: Jennifer Horton Shares Some News

Days of Our Lives Jack runs into Jennifer Horton (Melissa Reeves) and starts to tell her about the serum. Jennifer tells Jack that she made a date, Jennifer is moving on and not looking back. Jennifer tells Jack she was on a date with this guy on New Year’s Eve before he blew back into Salem. Jack tells Jennifer he has decided to restore Jennifer’s press credentials. Jack says he cares about Jennifer and their children. Jennifer tells Jack to have a good life and walks off.

Days of Our Lives Haley Chen (Thia Megia) is having visions of Claire Brady (Olivia Rose Keegan) attacking her. J.J. Deveraux (Casey Moss) arrives, and Haley is acting funny. J.J suggests that Haley try to get some rest. Haley says she can’t; she wants to make breakfast for J.J. Jack shows up to speak to J.J. alone, J.J. tells him no. Jack tells J.J. he had the serum made up and took the first dose, J.J. thinks he is lying.

J.J asks Jack if taking the serum isn’t risky; he says he has the antidote made up already. J.J. is skeptical of Eve helping Jack. He wants to know if Jack feels the same about remembering Jennifer. Jack didn’t tell Jennifer he took the serum because she was going on a date. J.J. wishes Jack, good luck with his memory. Haley offers to make J.J. breakfast, he turns her down and goes running errands. Haley goes to the bedroom and continues to have visions of Claire. Haley runs out of the room screaming, Tripp Dalton (Lucas Adams) arrives and asks what happened.

Days of Our Lives Gabi Hernandez (Camila Banus) asks Stefan Dimera (Brandon Barash) if he is out of his mind. Gabi tells Stefan they need a new plan because Ted Laurant (Gilles Marini) and Kate Roberts (Lauren Koslow) will never admit to the truth.

Gabi wants to go after Nicole, Stefan says something doesn’t add up with Nicole. Stefan explains that there is no reason to destroy his life. She tells Stefan that Nicole wants Dimera. Stefan wants to fire Nicole, Gabi stops him. Gabi says he needs to keep his friends close and enemies closer. Stefan says Nicole needs to go now. Stefan is under suspension and cannot fire Nicole.

Days of Our Lives Tripp Dalton (Lucas Adams) is at the hospital waiting on a prescription for sleeping pills. Kayla Johnson (Mary Beth Evans) wonders why Tripp didn’t ask her about it. Tripp says he didn’t want to worry Kayla, so he went through Dr. Shah (Andre Khabbazi). Tripp tells Kayla he feels guilty about Claire’s mental state.

Kayla doesn’t think it is a good idea for Haley and J.J. to be living at the loft. Tripp explains that he and Ciara Brady (Victoria Konefal) need the rent money. Kayla bumps into Jennifer and overhears her reserving a table for a date. Kayla questions Jennifer and is surprised she is going out with Dr. Shah. Jennifer is done waiting on her Jack to return. Kayla is holding on to hope for herself and Steve Johnson (Stephen Nichols) as well.

Days of Our Lives Nicole Walker (Arianne Zucker) goes to the Kiriakis mansion to speak to Brady. Brady wants to talk about Nicole’s mask. Nicole claims to have been having a bad day when she put the wrestling mask on to scare Gabi away. Brady says he understands and asks Nicole where she got the mask. Nicole says she got it from Xander.

Days Of Our Lives Spoilers: Jack And Eve’s Major Blowout

Nicole claims that Xander was trying to get her to come back to him. Nicole says Xander wore that mask in Nashville. She offers to help Brady take over Dimera. Nicole wants to run the company and then help Brady mount a takeover. Brady tells Nicole she is not a Dimera.

Read more news, spoilers, and gossip on our Days of Our Lives homepage