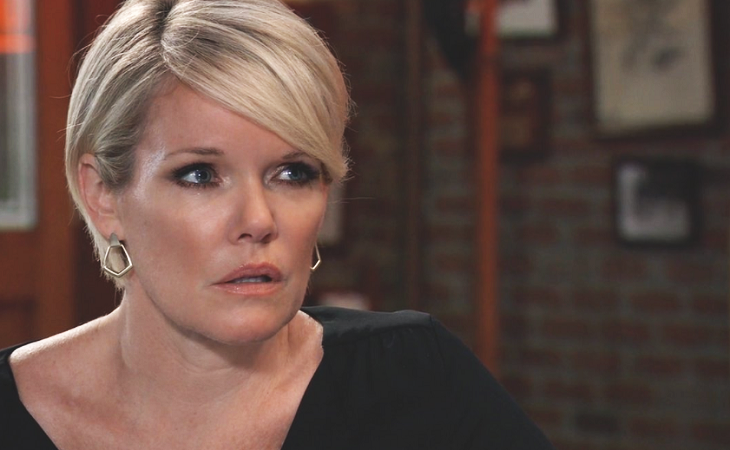 “General Hospital” spoilers for Friday, July 26, tease that Harmony Miller (Inga Cadranel) will fret over the danger “Wiley Cooper-Jones” might still be in. She’ll talk to her cellmate, Nelle Benson (Chloe Lanier), about Shiloh Archer (Coby Ryan McLaughlin) being out on bail. Harmony will insist that Brad Cooper (Parry Shen) and Lucas Jones (Ryan Carnes) need to take “Wiley” and run.

Nelle will be rattled by Harmony’s comments, so she’ll be pleased when Michael Corinthos (Chad Duell) finally takes her call and agrees to come see her. “General Hospital” spoilers say Nelle will decide to tell Michael the truth, but fate will step in soon enough. Some kind of technological disaster will force a change of plans, so that could be as simple as the prison alarm system malfunctioning or some other shocker.

General Hospital Spoilers – Chelsea Has A Warning For Franco Baldwin

Chelsea (Jen Ray) probably won’t know much about that, but she will have a warning for Franco. She’ll insist he shouldn’t take a drive, but Franco will scoff at her words of caution. Meanwhile, Valentin Cassadine (James Patrick Stuart) will note that he’s been given special instructions. He’ll be there to take Liesl home from the hospital, but she won’t be on board with the idea.

It looks like Liesl will cause a fuss and prompt Franco to offer her a ride instead. Thankfully, it doesn’t appear there’ll be any major disaster on the road – not yet anyway. Even so, Franco should really listen to Chelsea the psychic’s advice. He’s bound to face some car calamity at some point since GH is bringing this warning into play.

At Crimson, Ava and Nina Reeves (Cynthia Watros) will have a showdown. Nina will say something that offends Ava – perhaps regarding her treatment of Kiki Jerome (Hayley Erin) before she died. Ava will snap that Nina shouldn’t look down and add that it’s a long way to fall. She may think Nina and Sasha Gilmore’s (Sofia Mattsson) relationship may turn out not to be so perfect after all.

Other “General Hospital” spoilers say Jasper “Jax” Jacks (Ingo Rademacher) will be treated to Champagne and good company. He’ll be puzzled when Carly Corinthos (Laura Wright) dotes on him a bit, but she’ll have some good reasons. One of those reasons may simply to be offering gratitude. Jax is a great friend to Carly – and she could use his comfort or at least a distraction thanks to her baby fears.

Across town, Harrison Chase (Josh Swickard) will want a fresh start with Hayden Barnes (Rebecca Budig). He’ll apologize for getting off on the wrong foot and wonder if they can hit the reset button.

Hayden will smile at Chase, so it seems she’ll like that idea. She’s got plenty of haters in Port Charles, so she’ll probably welcome the idea of getting along with a friendly face.

“General Hospital” has some fantastic scenes coming up. We’ll give you updates as other details and details emerge. As always, more detailed Spoilers and Breaking news will appear here on Hollywood Hiccups!