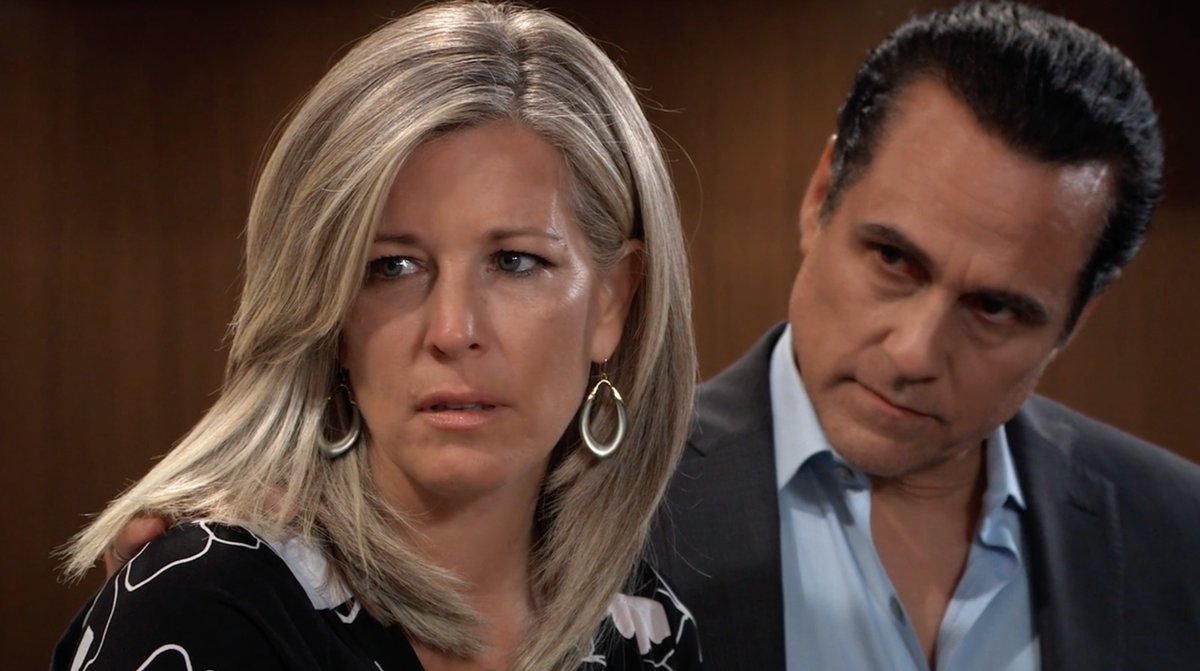 General Hospital (GH) spoilers for Thursday, July 25, 2019, reveals Sonny Corinthos (Maurice Benard) wants to speak to Robert Scorpio (Tristan Rogers). Robert believes knowing about Dev (Aston Arbab) is a sticky situation now that he is D.A. Sonny wants to talk about Dante Falconeri (Dominic Zamprogna). Sonny knows that Dante is not home, nor is he going to treatment. Robert says he will use whatever contacts he has to keep an eye on Dante. Robert believes he and Sonny need to declare some boundaries. Robert promises that he is going after Shiloh Archer (Coby Ryan McLaughlin) as well.

General Hospital’s Jason Morgan (Steve Burton) stops by to talk to Carly Corinthos (Laura Wright). Jason asks Carly how things are going with Dev. Carly doesn’t need a dishwasher. Carly says things are about to get crazy around there. Jason asks if there is something Carly isn’t telling him about the baby. Carly tells Jason the baby has Spina Bifida and talk about what could be wrong. Jason offers to let Carly scream at him to take out her frustrations. Carly wants Jason to keep an eye on Dev.

General Hospital’s Sonny and Carly are at the doctor’s office for an ultrasound. Carly asks about in-utero surgery; she is told she isn’t a candidate for the surgery because of her blood pressure. Sonny asks about other options; the doctor begins the ultrasound. The doctor tells Sonny and Carly that the baby has a mild form of spina bifida, but it can still have other complications. The doctor further explains that the baby will have to have immediate surgery.

General Hospital’s Jocelyn Jacks (Eden McCoy) tells Cameron Webber (William Lipton) that the lock was gone from the footbridge. Jocelyn says it was left there so everyone would know she loved Oscar Nero (Garrin Stitt). Jocelyn questions who would remove the locks. Jocelyn says it is stupid freaking out over the lock. Cameron tells Jocelyn he cut the locks off, he was ordered to for his community service. Cameron would have saved it had he known. Cameron and Dev discuss making things right.

Jocelyn tells Trina Robinson (Sydney McKayla) that she could go to the footbridge and remember Oscar and that isn’t something she will always be able to do. Cameron and Dev get to the dumpsite to look for the lock. Jocelyn hates to know that her life will eventually fill the whole Oscar left when he died. Trina tells Jocelyn that Oscar would not want her to be unhappy just to remember him. Cameron jumps into a dumpster looking for the lock. Dev claims to be doing a report about waste management. Dev distracts the guard while Cameron looks for the lock.

General Hospital’s Harrison Chase (Josh Swickard) is upset that Hamilton Finn (Michael Easton) didn’t tell him about Hayden Barnes (Rebecca Budig) when Finn knows everything about Chase. Finn says he should have made more of an effort to be brothers. Finn tells Chase that Hayden was the first person to notice that he was an addict. Hayden was there for him, and he fell for Hayden.

Finn loved her, but they have a lot of challenges in their relationship. Finn tells Chase that Hayden was pregnant. Chase is excited about being an uncle, but Finn tells him the baby didn’t make it. Finn says that is all he can share for today. Robert wants to talk to Finn about something Anna asked him to check on for her. Cassandra Pierce (Jessica Tuck) has been spotted once with a gentleman.

General Hospital’s Willow Tait (Katelyn MacMullen) shows up at the Metro court looking for a job. Michael offers to help Willow, but she refuses. Willow says today is Wiley Cooper-Jones (Theo and Erik Olson) birthday, and he is with a happy family. Willow asks how Michael is doing since today is also his son’s birthday and Michael is going through much more than she is. Willow asks if Michael wants to talk.

Michael plans to focus on Wiley’s birthday. Wiley and Michael agree that it doesn’t make things any better. Chase shows up to pick up Willow who informs him she hasn’t picked up the application yet. Michael wants Jason to help him build a treehouse there when he’s done at the Quartermaine’s. Michael receives a collect call from Nelle Benson (Chloe Lanier). Michael refuses the call from Nelle. Chase tells Willow that he loves her, Willow loves Chase too. Michael gets another call from Nelle.

General Hospital’s Jasper Jacks (Ingo Rademacher) talk to Nina Reeves (Cynthia Watros) about the Ava Jerome issue of Crimson and profiling Cassandra next. Nina tells Jax that she knows he has already investigated Cassandra. Jax agrees and offers to take Nina and Valentin Cassadine (James Patrick Stuart) to dinner. Jax schedules dinner for tonight, Curtis Ashford (Donnell Turner) asks what Nina was thinking. Nina and Jax are playing with each other.