Bold And The Beautiful POLL: Who Will Douglas Tell His Secret To? Vote Now! 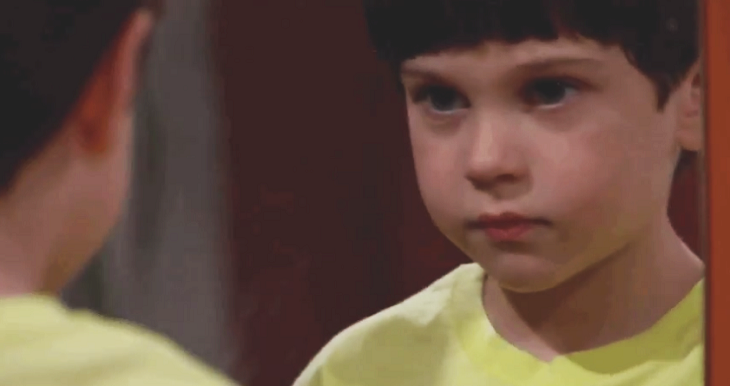 Douglas Forrester (Henry Joseph Samiri) used one of the descriptive words that fans of ‘The Bold and the Beautiful’ have been thinking. He told his dad, Thomas Forrester (Matthew Atkinson), that he was mean. That happened after Thomas verbally and physically (by grabbing his arm) threatened his son to never say that he heard him say Beth Spencer (Madeline Valdez and River Davidson) was alive in an overheard phone conversation.

In effect, Thomas told Douglas to keep a secret. That raised to five the total number of people Atkinson’s villainous character has attempted to intimidate.

Emma Barber (Nia Sioux) was the only person to rebuke Thomas’ threats. She paid for her life on Mulholland Drive because the glare of Thomas’ headlights in Emma’s rear view mirror caused her to lose control of her car, drive off the road, and crash down below.

Bold And The Beautiful Spoilers – Hope Forrester Is An Obvious Choice

It would seem too easy to have Douglas tell Hope Forrester (Annika Noelle) right away or maybe, at all. She would be instantly shaken by what he would say. If questioned about the shocking statement, Douglas could also tell Hope what Thomas did to him the other day.

Hope would likely sternly question her husband in name-only, Thomas, who would lie about what was said. But Hope would also seem prone to mention what happened to Liam Spencer (Scott Clifton), who would be sent into an even higher state of alert.

The little guy is in contact with a number of people at the estate where he and his dad have been staying since they arrived from New York.

Bold And The Beautiful Spoilers – Steffy Forrester Is Another Candidate

Ridge Forrester (Thorsten Kaye) and Steffy Forrester (Jacqueline MacInnes Wood) are two candidates, as Douglas’ grandfather and aunt. Actually telling them could extend the drama, as they’ve been prone to not believe what’s being said about Thomas’ intentions.

Brooke Logan Forrester (Katherine Kelly Lang) would act on Douglas’ information immediately. Ridge might slough it off, which would also further the disagreement ‘Bridge’ is having about Thomas.

Flo Fulton Logan (Katrina Bowden) would be crushed if she was told, or learned what happened to Douglas. Knowing that her inaction has furthered Hope’s sadness has proven to be too much. But if Flo ever believes that Douglas is in danger she just might come clean, regardless of the serious consequences that would result.

Thomas’ threats are real and Flo has seen the dark side of his personality on many occasions. But knowing that a child was being threatened and that person was Douglas, who didn’t know Thomas was talking on the phone to Flo about Beth, would provide a test like none Bowden’s character has endured so far.

Of course, a variety of other characters who don’t know Phoebe Forrester is Beth, and some who do, could also happen to learn Douglas’ secret as well.

Fans of ‘The Bold and the Beautiful’ rightfully express their opinions on a regular basis. So, who will Douglas tell his secret to? Please vote in our poll below!