Days Of Our Lives Spoilers: Jennifer Confronts Eve About Her Deception 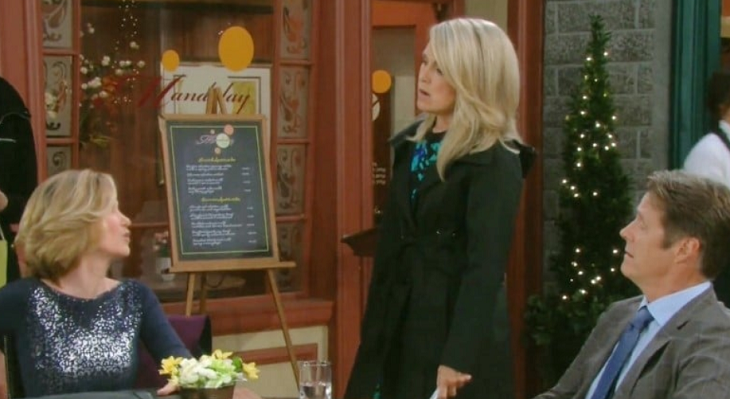 Spoilers tease that Jennifer Horton (Melissa Reeves) will have a heated discussion with Eve Deveraux (Kassie DePaiva) soon on Days of Our Lives.

Days of Our Lives viewers know that even though Jennifer tried to move on and was trying to get Dr. Henry Shah (Andre Khabazzi) to go out with her, her heart has always belonged to Jack Deveraux (Matthew Ashford). She will feel protective of Jack until her dying day and will always advocate for him.

He arrives at Salem University Hospital and tells Jennifer and Dr. Kayla Brady (Mary Beth Evans) that Eve not only tried a fake memory serum on him after assuring him she supported him getting his memories back, but destroyed every ounce of the real serum and antidote he had made up by a private lab at his own expense. Then he finds out Eve set up a police raid on the Salem University Laboratory where all batches of the serum and antidote, and anything related to them have been impounded.

Jennifer rushes over to the Salem Police Station along with Jack, where they find Eve has just shredded all the notes for the formula and antidote. Jack, gone from ballistic to a blind rage, wants a divorce from Eve and fires her as Police Commissioner. Since Jenn is already there and sees what Eve has done, this confrontation with Eve will probably take place right there in front of Jack.

Jennifer, unlike Jack, has seen what Eve has been up to all along, ever since she crashed the New Year’s Ball with Jack on her arm. She was taking advantage of an amnesiac Jack training him as her puppet and Eve being his puppetmaster!

Jack himself, in the meantime has just wised up and had a very rude awakening concerning what his “lifesaver” and “loving wife” really is and what she has been doing. She has been controlling and manipulating him and lying to him about his loved ones, especially Jenn.

Jennifer won’t have to get her press pass back from Jack to expose Eve and her sins to the world. She will be there as it happens, remembering everything play by play from Eve’s shredding of the proprietary formula and antidote notes.

She will also be more than likely witnessing as Jack fires Eve. He will be so mad that he might even tell Jenn about Eve’s cover ups of Claire Brady’s (Olivia Rose Keegan) crimes in an effort to frame Ben Weston (Robert Scott Wilson) for the cabin fire.

Eve should be trembling in her shoes by the time both Jack and Jennifer, quite possibly at the same time, are done with her. Best of all, Jack might realize who really loves and supports him – and it sure isn’t Eve!