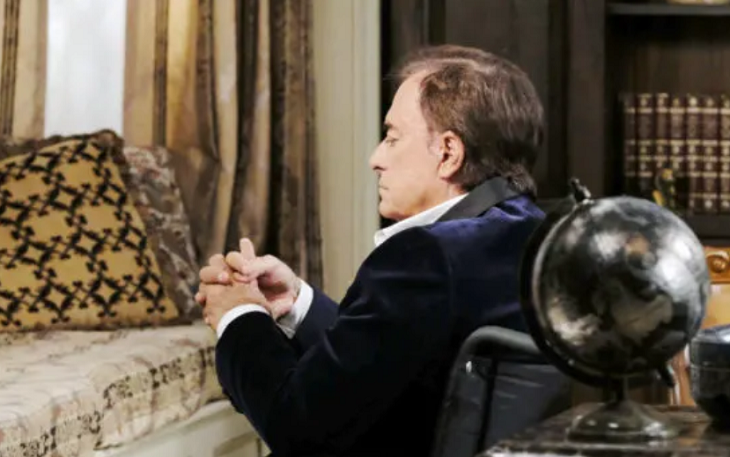 Days of Our Lives Jack Deveraux (Matthew Ashford) sees Eve Deveraux (Kassie DePaiva) burning Dr. Rolf’s (William Utay) diary and is furious with her. Jack demands to know why Eve did this. Eve tells Jack he doesn’t need the diary anymore. She says it’s fine if he doesn’t get his memory back, they can focus on the future.

Eve tries to lie her way out of changing the serum, saying she was trying to protect him. Eve says she has fallen in love with him and admits to hating Jennifer. She asks why Jack didn’t say anything when she told him she loves him. Jack tells Eve she doesn’t know what love is. Jack says she uses her daughter’s death as a sob story.

Jack tells Eve he is going to divorce her and is going to take that drug over and over until his memory returns. Eve tells Jack he will never get his memory back. She tells him she switched the serum herself. He begs for the serum back but Eve promises to smash his past.

Days Of Our Lives Spoilers: Jennifer Confronts Eve About Her Deception

Days Of Our Lives Spoilers – Gabi Hernandez Wants To Get Married

Days of Our Lives Gabi Hernandez (Camila Banus) says that Stefan Dimera (Brandon Barash) cannot be on suspension. Stefan says another Dimera has to take over the company if they get rid of him. Stefan wants Abe Carver (James Reynolds) to put out a statement with all the facts about his charges to help him keep his job.

Abe agrees but wants to talk about Nicole Walker (Arianne Zucker) first. Stefan wants to deal with his issues with Nicole after this is settled. Gabi says she knows Stefan doesn’t believe her theory, Stefan knows Nicole wants him out of Dimera. The board refuses to reinstate Stefan and Gabi suggests she and Stefan get married. Stefan believes Gabi has lost her mind, she disagrees.

Days of Our Lives Nicole tells Brady Black (Eric Martsolf) she can become a DiMera and run the company. Brady asks if Nicole wants to be adopted by the DiMera’s. Nicole says Brady can claim that Kristen Dimera (Stacy Haiduk) is Brady’s son’s mother. Brady says Kristen stole his son; she couldn’t have children they tried. Brady was so in love with Kristen, but she was manipulating him. Brady says revenge can make a good man crazy. He talks about everything Kristen did to him and then tells Nicole that Gabi thinks Nicole is involved in the kidnapping.

Brady reminds Nicole that Stefan would have to adopt her for her to be a DiMera. Nicole says she can marry one. Brady tells Nicole that Stefan isn’t going to marry her and wonders who she plans to marry. Nicole is not giving up and will find a way around this for Brady. Brady doesn’t want Nicole to destroy DiMera for him. Nicole goes to a room at the Inn, and Tony DiMera (Thaao Penghlis) is sitting there in a wheelchair.

Days of Our Lives Haley Chen (Thia Megia) tells Tripp Dalton (Lucas Adams) that she saw Claire Brady (Olivia Rose Keegan) again and she is out to kill them. Tripp gives Haley a sedative in hopes of her getting some rest. Hayley falls asleep on Tripp and takes a nap. Tripp offers Haley his room, but J.J. comes home. J.J. asks if Haley is ok and she suggests taking a nap. Tripp starts to put groceries away for them.

Days of Our Lives Henry Shah (Andre Khabbazi) arrives for his date with Jennifer Horton (Melissa Reeves as J.J. Deveraux (Casey Moss) is telling Jennifer that Jack took the memory serum. Henry wants himself and Jennifer to get to know each other better. Henry asks Jennifer if her daughter likes living in Paris, she does.

Jennifer talks about the kids with Henry. Jennifer misses the day to day life with her family more than she can say. She flashes to a memory of Jack, and Henry asks if she is thinking about Jack. Jennifer feels terrible about the date going so badly.

Jennifer tells Henry Jack took the serum and could remember their life together. Henry tells Jennifer he doesn’t want to get hurt again and ends their date. He hopes that Jack remembers Jennifer and makes her as happy as she deserves. Julie Williams (Susan Seaforth Hayes) asks Jennifer where Henry is, she explains he left.

Days of Our Lives Spoilers: Can Xander Be Redeemed? https://t.co/QQm0rxbKeZ pic.twitter.com/NgXG1nU5YI

Read more news, spoilers, and gossip on our Days of Our Lives homepage