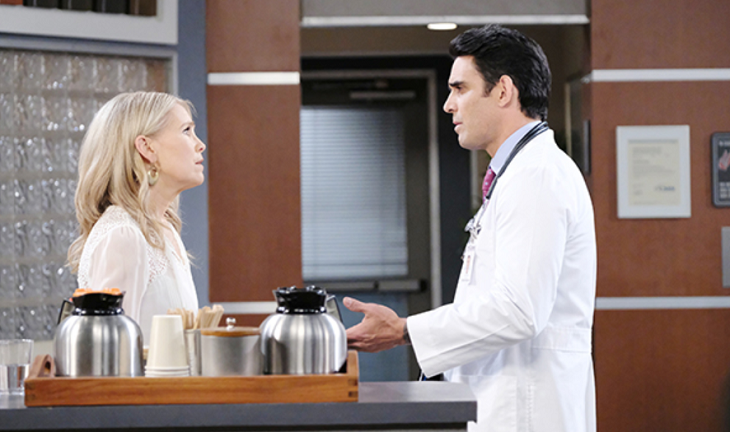 Days Of Our Lives Dr. Henry Shah (Andre Khabbazi) has become Jennifer Horton’s (Melissa Reeves) go-to guy whenever someone breaks her heart. Will Jennifer reject Henry for Jack Deveraux (Matthew Ashford) like she did over Eric Brady (Greg Vaughan)?

Days of Our Lives Jennifer knows that Henry cares for her and wants to have a relationship, but whenever they are together, the grass always seems greener on the other side. When is Jennifer going to consider Henry’s feelings in this and stop using him as a fill-in when she is without a man?

Henry deserves a woman who will put him first and be true to him, not someone who is always waiting for an ex-lover to return. Will Jennifer ever consider Henry’s feelings, or will she continue to jerk him around on a chain until she finds happiness?

Henry must be a glutton for punishment because he always goes back for more. How is it that Henry is so taken with Jennifer that he seems to be waiting on the sidelines every time she breaks up with a man to pick up the pieces? Henry is a nice looking man who could literally have any woman he wants, but he keeps going back to Jennifer, hoping for better results each time. Does he have such little confidence in himself that he cannot move on from a woman who has never been truly his?

Days of Our Lives Jack has decided to take the memory serum in which his wife, Eve Deveraux (Kassie DePaiva) will alter the formula so that his memory does not return. After Jack discovers Eve’s deception, it’s expected he will break up with her and run back to Jennifer.

Days Of Our Lives Spoilers – Why Should Henry Shah Be A Doormat?

Days of Our Lives Henry seems to be a doormat when it comes to Jennifer, but why? Yes, Henry likes Jennifer, but they have never had a real relationship because she is always leaving him for someone else.

Henry needs to move on and find a woman who can devote herself to him instead of waiting around for one who can’t. Why does Jennifer believe Henry will always be there to run back to when she is hurt?

Days Of Our Lives Spoilers: Jack Makes A Life-Changing Decision – He Wants His Memories Back

Henry can do better than being the man in waiting, but he must think Jennifer is so special, even though she makes him wait. He needs to just move on and forget her. Will Henry ever get to be happy without worrying about his girlfriend leaving when another man snaps his fingers.