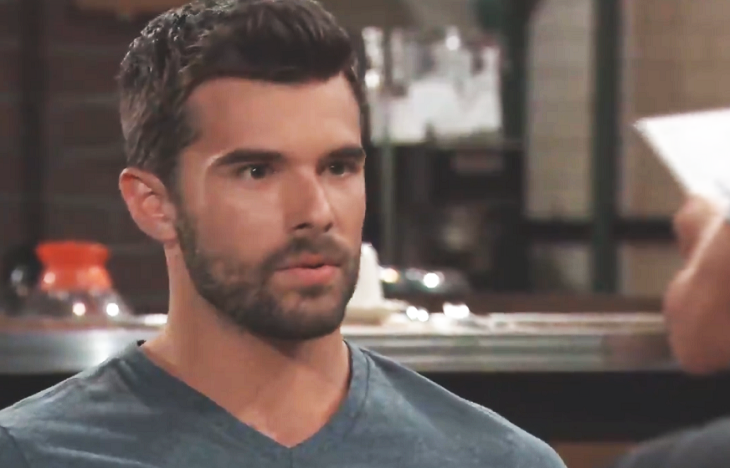 General Hospital spoilers tease that Detective Harrison Chase (Josh Swickard) may ultimately be the one to find his little niece or nephew. Hayden Barnes (Rebecca Budig) was pregnant when she left his older brother Dr. Hamilton Finn (Michael Easton) at the altar and left town a couple of years ago.

As General Hospital viewers should recall, Hayden left Port Charles suddenly, pregnant with Finn’s baby, and was a no show at their wedding. She told no one that her ex-husband, Jared Preston Jr. (Matt Corboy) had contacted her and tried to blackmail her emotionally and financially over his having taken the fall for her when she drove impaired and killed a child, running the child over.

Hayden embezzled money from ELQ, where she worked at the time, gave it to Jared to shut him up, then did some fancy accounting tricks she learned from her father, who was in prison for Ponzi schemes, to put the money back. Then fearing she’d be found out anyway, she skipped town. Later, she sent Finn a letter with no return address telling him that she had miscarried their baby. But as General Hospital viewers later found out, she hadn’t!

In a recent episode of General Hospital, Finn and Chase got together to catch up, and Chase was upset that he had to find out from Hayden’s police record that she and Finn had been engaged! He thought having a real relationship with his brother meant there were no secrets between them. Chase had been more open and forthcoming with Finn than Finn had with him, so he had felt things were unequal between them.

Finn filled him in on how he and Hayden became involved and engaged, about the drug addiction that Hayden, along with Curtis Ashford (Donnell Turner) helped him overcome. He also tells him that she was pregnant when she left him standing at the altar.

When Chase hears that Hayden was pregnant and skipped town, even if Finn tells him that she later wrote that she’d miscarried, his cop brain will go into overdrive. He knows Hayden for the liar and con-woman she had been in the past from her police record and he will have his serious doubts that his nephew or niece really died.

Of course, Chase may be guilty of a little subconscious transference of secrets involving babies from his own experiences with his girlfriend Willow Tait (Katelyn MacMullen). She had lied and said she had miscarried her baby with Shiloh Archer (Coby Ryan McLaughlin), to protect the baby. But she had really put him up for adoption, and he will wonder if Hayden did the same thing, only not for such noble reasons.

He may not tell Finn about his suspicions. But withholding the truth because of an investigation is a lot different than withholding the truth because he doesn’t want Finn holding out hope for that his son or daughter is alive, until he has something substantial to go on. He just doesn’t want to give his brother false hope, which is a good intention.

Will Chase start trying to track down Baby Finn when he hears Hayden was pregnant, or will Curtis finally drag the truth out of her? Finn and Curtis might even work together on an investigation of what happened to Baby Finn!

We’ll keep you posted as other news and rumors emerge. Stay tuned to General Hospital and keep watching General Hospital spoilers frequently for all the latest news, updates and developments!