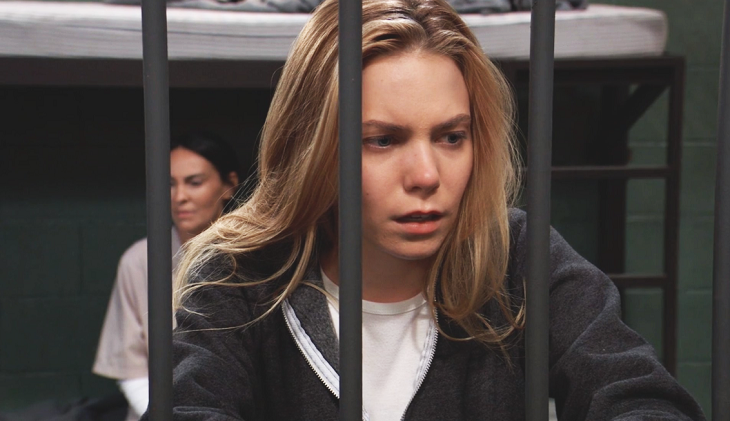 General Hospital’s Nina Reeves (Cynthia Watros) is looking at the new Crimson issue when Valentin Cassadine (James Patrick Stuart) walks into the room. Nina needs Valentin to do her a favor tonight. Ava interrupts Valentin and Nina, threatening to sue Nina over the article.

Valentin is shocked when Nina informs him of their dinner guests. Nina wants to know why Jax has a file on Cassandra Pierce (Jessica Tuck). Valentin mentions Nikolas Cassadine (Tyler Christopher) and Ava is upset that he is talking about Nik.

Valentin accuses Ava of making up lies; she doesn’t agree. Ava is not happy how Kiki Jerome (Hayley Erin) is portrayed in the magazine. Ava reads comments on the article and is grateful for the support. Nina tells Ava that everyone is not supportive of her. Ava reads some hateful comments. Ava accuses Nina of twisting things, Nina tells Ava she gave her a platform to tell her story. Ava gets mad again.

General Hospital’s Hayden Barnes (Rebecca Budig) and Jasper Jacks (Ingo Rademacher) are at the Metrocourt. Hayden thanks Jax for getting her an invitation to dinner at Valentin’s. Jax tells Hayden it gives them a chance to search for their objective. Harrison Chase (Josh Swickard) confirms that a man pushed Liesl Obrecht (Kathleen Gati) from the Haunted Starr.

Chase goes to the hospital to question Liesl again before her release. Valentin shows up to take Liesl to Windemere. Chase runs into Hayden as he is leaving the hospital and wants them to do a reset. Hayden is glad that Finn has Chase. Liz Webber (Rebecca Herbst) approaches Hayden as Chase leaves and invites Hayden to move into her home. Hayden declines and Liz isn’t able to go house hunting with her.

General Hospital’s Michael Corinthos (Chad Duell) answers Nelle Benson’s (Chloe Lanier) call, she thanks him for doing so and Nelle wants Michael to come to visit her. Nelle thinks they should grieve together to honor their son. Michael tells Carly Corinthos (Laura Wright) that he is going to see Nelle. Michael says he needs to feel close to his son, and if seeing Nelle does that, he is going. He arrives, and Nelle is told she has twenty minutes.

General Hospital’s Franco Baldwin (Roger Howarth) runs into a new psychic named Chelsea Lamb who warns him not to take the drive he has planned. The psychic has a message from Kiki but cannot tell Franco what another psychic meant. Franco tells Liz about the message from the psychic.

General Hospital’s Carly goes to the Metrocourt and tells Jax about Michael visiting Nelle. Carly is afraid that Michael is vulnerable to Nelle. Jax thinks Carly is overreacting. Jacks feels bad for bringing Nelle into their lives. Carly says Jocelyn Jacks (Eden McCoy) would not be alive if it weren’t for Nelle. Ava approaches Jax and asks if he has gotten his revenge yet as Carly talks to Nina about the article.

Nina questions Carly about Jax. Ava tells Jax he got exactly what he wanted. Jax says he usually does and leaves. Chelsea joins Ava and says she has to thank Jax if she ever meets him. Chelsea tells Ava it is up to her whether or not she believes the messages. Chelsea tells Ava about Kiki’s message to Franco. Ava says she did the interview for Kiki and asks if she can make peace with Kiki now. Carly tells Nina that Jax is a great boss. Nina is surprised they are exes.

General Hospital’s Harmony Miller (Inga Cadrenal) is talking to Nelle in their cell. Harmony talks about her grandson and how she wants to protect him from his father. Harmony talks about the tattoo ceremonies and how Shiloh Archer (Coby Ryan McLaughlin) used his followers.

Harmony talks about how Shiloh could take the baby from his fathers. Nelle is shocked when Harmony says Wiley Cooper-Jones (Theo and Erik Olson) name. Harmony explains that Shiloh could ruin the adoption and get custody. Harmony hopes Brad Cooper (Parry Shen) and Lucas Jones (Ryan Carnes) take Wiley and run with him.