Days Of Our Lives Spoilers: Kristen Proposes Marriage To Her Own Brother 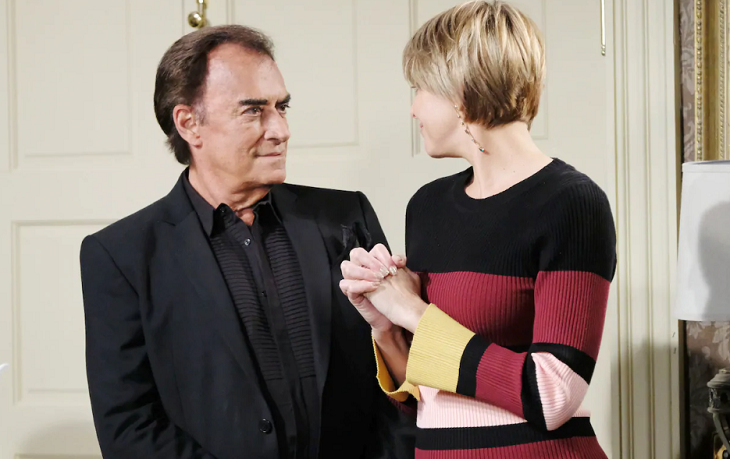 Days of Our Lives spoilers tease that Kristen DiMera (Stacy Haiduk), back in her disguise as Nicole Walker (Adrianne Zucker) will propose marriage to her own brother soon on Days of Our Lives!

Kristen won’t propose to Stefan DiMera (Brandon Barash) of course. Although Days of Our Lives spoilers say that Stefan and Gabi Hernandez (Camila Banus) will get married in a joint ceremony with Kristen/Fake Nicole and one of Kristen’s other brothers, who has come back from the dead, Tony DiMera (Thaao Penghlis). But since Tony will know what he’s getting into, Days of Our Lives viewers still have to wonder if he’s really Andre!

Days of Our Lives viewers have to wonder why Kristen is so sure Tony or Andre, whichever one he is, wouldn’t want to take DiMera Enterprises away from Stefan himself. but Kristen knows where Tony is and goes to his apartment by herself, first, disguised as Nicole.

She explains to him what she wants to do and that he would be marrying her under false pretenses, as Nicole. She takes off her mask and reveals herself as Kristen. She then talks Brady Black (Eric Martsolf) into going to Chicago with her to find “either Andre or Tony, who she remembers rescued her from the warehouse fire in Nashville”. She also wants Brady to help her convince Tony to marry her.

It must be Tony after all, since he tells Kristen he’s hesitant, because he still loves Anna DiMera (Leann Hunley) and wants her back – unless Andre’s playing Tony again, of course. The marriage won’t be legal obviously, but somehow Kristen convinces him to do this for the sake of their family and their family legacy.

She will tell him Gabi is marrying Stefan and they wouldn’t want DiMera to fall into the hands of someone like Gabi, should something happen to Stefan. Then when she comes back with Brady in tow, Brady helps her convince Tony to marry her all over again, unaware that fake Nicole had already set everything up with Tony ahead of time.

Meanwhile, back in Salem, Gabi works on Stefan to marry her, so they can take over DiMera together. It takes a while, since Stefan is smitten but doesn’t want to rush into a marriage just yet, but he finally agrees.

The wedding day comes, and Abe Carver (James Reynolds), who apparently may be performing the ceremony, tells them that Nicole might be getting married that day too. They will all wonder what’s going on and who she’s getting married to!

Days of Our Lives Spoilers, Monday July 29: Stefan And Gabi Rush To The Altar https://t.co/eItcQPBRy0 pic.twitter.com/H1BCXdz2dH

Later, Tony and Nicole, now newlyweds, with Brady having witnessed their ceremony, come back to Salem. The two couples will try to convince DiMera Enterprises Board of Directors member Mr. Shin (Michael Hagiwara) to make one of the two brides CEO of DiMera.