General Hospital Spoilers: Should Chase Be Upset Finn Didn’t Tell Him About Hayden? 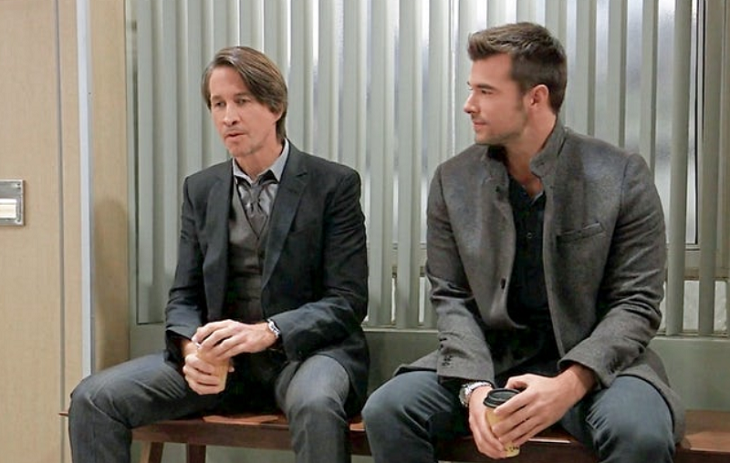 General Hospital’s Harrison Chase (Josh Swickard) seems to be offended that Hamilton Finn (Michael Easton) hasn’t shared all of the details about his life with him, especially Hayden Barnes (Rebecca Budig). However, Finn thought Hayden was out of his life, so why would he have mentioned her to him?

General Hospital’s Hayden was there for Finn when no one else was. Finn literally pushed away everyone else in his life and built a life around Hayden and eventually the child they were having together.

Finn was an addict, but he got past that with Hayden’s help and was happy until she deserted him and told him she lost their child. Finn thought Hayden was out of his life, so what purpose would it serve to share their story with Chase?

General Hospital’s Hayden and Finn were buying a house together and going to be married when she walked off and left him with their child. Granted, Hayden was forced to leave by her ex-husband, but she could have fought him on it.

Hayden could have tried to find a way to work it out without leaving town or keeping Finn from his child. Hayden obviously did not care enough about Finn to even be honest with him about their child.

Hayden made Finn feel like a fool, and he wasn’t eager to share that with anyone, even his kid brother.

General Hospital’s Finn has moved on with Anna Devane (Finola Hughes), and Finn has been very open about their relationship. Finn’s current relationship should be a lot more important than the woman that left him behind, so why is Chase so hung up on Hayden?

Hayden is the past – Anna is the present. Chase should be happy that Finn is confiding in him at all. It isn’t like Chase and Finn have always been close. Chase needs to give Finn time to confide in him instead of getting upset because he hasn’t told him everything in his love life so far.

Perception is reality. How will Hayden and Jax use their perceived relationship to their advantage?#GH is brand-new and starts RIGHT NOW on ABC! @RebeccaBudig pic.twitter.com/U1DkQmepho

It is nice that Chase is concerned about Finn and wants to have a relationship with him, but he cannot expect Finn to be open about everything at once. Finn will confide in Chase when he is ready, and he should not be upset over this.