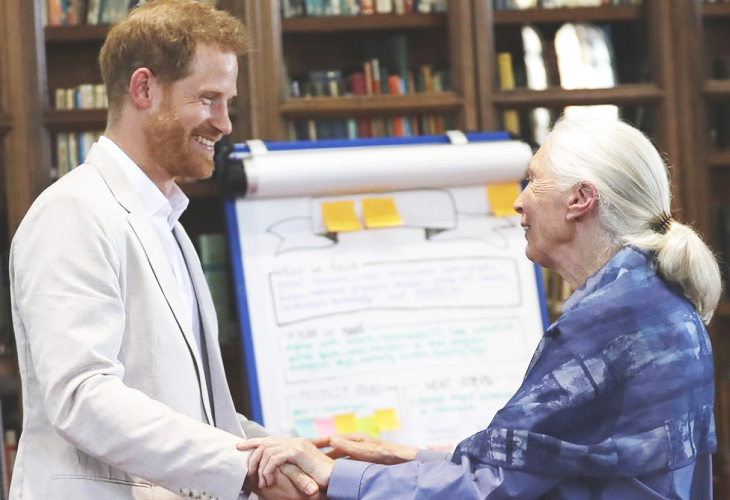 Prince Harry, a passionate supporter of wildlife conservation, was the guest of honor at a meeting for Roots and Shoots on July 23. The Duke of Sussex and Dr. Jane Goodall, the world-renowned ethologist and primatologist, greeted each other with the chimpanzee greeting.

The unusual greeting was promoted by Dr. Goodall, who asked the Duke of Sussex if he remembered the greeting she taught the ginger-haired prince when they met in December 2018.

A smiling Harry and chimpanzee expert then reenacted the greeting. As the timid female chimpanzee, Jane Goodall approached Prince Harry who encouraged her with a pat on the head and encourages her for a hug.

Dr. Goodall Was At Frogmore Cottage For A Meeting With Harry And Meghan

Roots & Shoots, is an organization that unites youth worldwide who share a common goal. 150,000 young people who are leaders in their communities, spearheading initiating projects that “make the world a better place for people, animals and the environment.”

The Mirror reports that Prince Harry and Meghan Markle invited Dr. Goodall to Frogmore Cottage in June for a private meeting. The primatologist reportedly cuddled a then 5-week-old Archie and spoke to the prince about his continued passion about wildlife conservation now that he is a father.

Harry and Meghan shared additional conservation news. The Walt Disney Corporation has launched an initiative that has been named Project Pride. This will be “a global conservation campaign to support efforts protecting the rapidly diminishing lion population across Africa.” The announcement came after the Duke and Duchess of Sussex attended the European premiere of Disney’s live-action remake of “The Lion King” recently.

Disney has pledged a donation to Prince Harry and Meghan Markle’s upcoming environment and community initiative. Further information will be formally announced this autumn, probably when Harry and Meghan embark on the Royal tour of Southern Africa.

During the tour, Harry will carry out visits to Malawi and Angola. The prince will also have a short working visit to Botswana en route to the other countries. Formal details regarding Meghan Markle and where the Duchess of Sussex will visit during the trip have yet to be announced.