Young And The Restless Spoilers: Shey Is Over – Will This Open The Door For A Shadam Reunion? 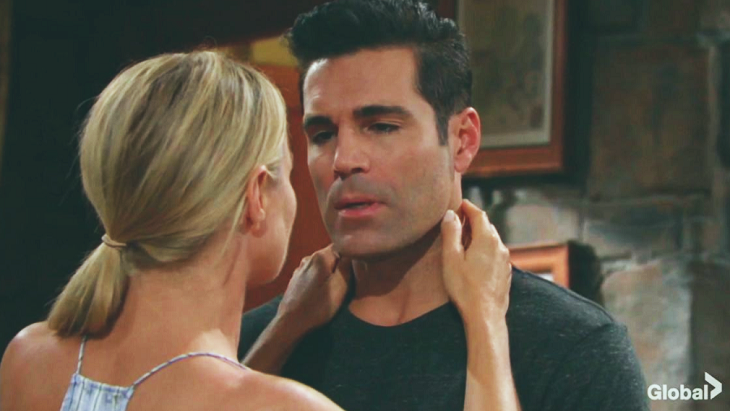 The Young and the Restless spoilers tease that Rey Rosales (Jordi Vilasuso) is about to leave Sharon Newman (Sharon Case). Her constant involvement in Adam Newman’s (Mark Grossman) many problems will force Shey to its temporary, or potential permanent end.

Adam asked Sharon to stand as a guardian candidate for Christian Newman (Jamie and Alister Tobias). She didn’t even consider asking Rey for his opinion and actually left the cottage without even saying goodbye.

That incident was a game-changer, or relationship-ender for Rey. He now realizes that a part of Sharon’s heart, seemingly a space that’s larger than the one she’s cordoned off for Rey, belongs to Adam. Y&R fans are also wondering if Chelsea Newman’s (Melissa Claire Egan) feeling that Sharon has always been Adam’s true love might actually be true.

This part of the plot is debatable, as Shadam was a dynamic power couple in the early 2010’s. But Chadam later supplanted it and Chelsea gave Adam a child, which Sharon never did.

Viewers see that Adam has been reversed SORAS’d by approximately ten years. That makes Grossman’s edition of this character about a decade and a half younger than Sharon. That’s not an issue in the least, as the Shadam backstory hasn’t changed.

However, it’s right to question whether Y&R’s push of Sharon toward Adam has developed organically since she first accepted Victor Newman’s (Eric Braeden) proposal to go to Las Vegas, Nevada, in hopes of unlocking Adam’s mind?

Then, there’s all the time the show and viewers invested in the development of Shey, which began building when Vilasuso joined the cast last summer. Rey and Sharon resisted involvement, which reflected a strong sense of morality. Then, after Ria was over, with Mia Rosales (Noemi Gonzalez) returning to Miami, Florida, with Arturo Rosales (Jason Canela), Shey’s connection was explored.

Now, after all they’ve waited for and just began to establish and in considering the various family and friend approval scenes that were written, Shey will be no more? Possibly, this is just a rest, rather than a breakup, as Adam is so flaky. Yet it must be said that Sharon continues to allow herself to be reeled in by Adam because she does care for him.

While not having fallen back in love, Sharon, when spurned by Rey, will have only one man to turn to. Adam being alone, with Chelsea having rejected him, will commiserate with Sharon again. With whatever they become, Shey would be the sequel to an arc for both characters and that projects as very interesting.