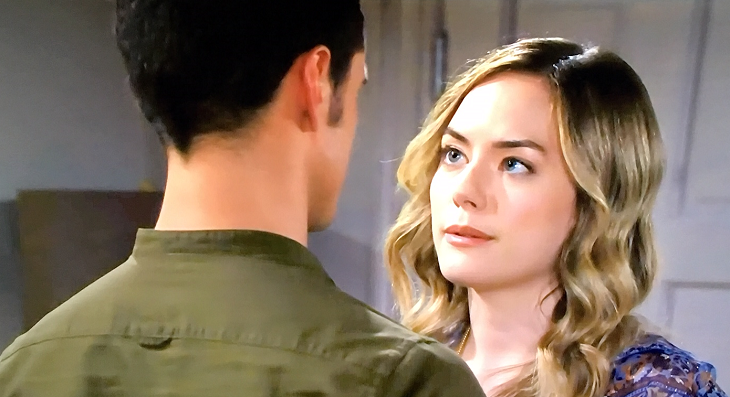 The Bold and the Beautiful spoilers for Tuesday, July 30, tease that Liam Spencer (Scott Clifton) will reel from what he’s just heard from Douglas Forrester (Henry Joseph Samiri). In a private chat with Liam, Douglas has just insisted that Beth Spencer is alive and that he can tell Liam exactly where she is. B&B viewers could practically see the wheels in Liam’s head turning as he gently questioned Douglas.

But since ongoing B&B spoilers indicate that Liam won’t find out the truth quite yet that Phoebe Forrester (River Davidson and Madeline Valdez) is Beth, it looks like Steffy Forrester (Jacqueline MacInnes Wood) might pop back into the room with the girls and interrupt Liam’s little chat with Douglas. Or Douglas could remember Thomas Forrester’s (Matthew Atkinson) stern threat about not talking about Beth and clam up.

In any event, Liam’s not going to stop pursuing this matter He appears to be putting the pieces of the puzzle together, including the information about Florence “Flo” Fulton (Katrina Bowden) possibly not having had a baby, Douglas’ statement, and the fact that Thomas has a secret. B&B viewers won’t want to miss a moment of this story as it unfolds!

Meanwhile, on the new episode of B&B on Tuesday, July 30, Flo will get an earful from the Logan sisters, and she’ll become determined to take action against Thomas. According to B&B spoilers, Katie Logan (Heather Tom) and Donna Logan (Jennifer Gareis) will get hold of Flo and the topic of Thomas will come up.

Katie and Donna will bring up all of Thomas’ past troubles and actions, and as Flo listens, she’ll become even more convinced that Thomas is dangerous and that he needs to be stopped before something terrible happens to her cousin Hope Forrester (Annika Noelle). Flo knows that Hope is currently alone with Thomas on their “staycation” honeymoon, and this will cause her serious discomfort.

According to B&B spoilers, Flo will start to panic after hearing about Thomas’ dark past, and that, combined with what she believes about Thomas’ role in Emma Barber’s (Nia Sioux) death, will lead her to want to come clean to Hope and everyone else. It looks like we’ll see some serious resolve in Flo as she decides that Thomas needs to be stopped and that Hope could be in terrible danger.

Speaking of Hope and Thomas, they’ll be in their honeymoon suite when things take an unfortunate turn. As B&B viewers know, Thomas has been seriously pressuring Hope to be intimate with him. Hope has rejected his advances on more than one occasion, and she’s just told Thomas that she’s unsure that she’s ready to make love just yet.

Well, according to B&B spoilers, Hope will apparently try to explain herself to Thomas, and in doing so, she’ll admit to him her feelings regarding Liam. It looks like she’ll tell Thomas that she still loves Liam, which certainly isn’t going to go over well with Thomas. Thomas is under a lot of stress and he’s clearly devolving, and Hope’s admission that she loves Liam will probably set him over the edge.

The Bold and the Beautiful spoilers say that Hope will unknowingly put herself in danger by admitting her true feelings for Liam. Ongoing B&B spoilers indicate Thomas will meet once again with his shady friend Vincent Walker (Joe LoCicero), who will give Thomas a special “gift” for Hope. Of course, the last time that Thomas got something from Vincent, it was drugs that he used on an unsuspecting Liam, so that Liam would sleep with Steffy.

It’s a horrible thought, but it looks like Thomas may plan to dose Hope with some drugs in order to make her more willing to be intimate with him. B&B viewers will have to tune in to see what ultimately happens here! Be sure to tune in on Tuesday to catch up on everything happening on B&B right now. Check Hollywood Hiccups often for updates, news, rumors, and spoilers!