Days Of Our Lives Spoilers & Recap Monday, July 29: Tony And Stefan Agree To Marry Kristen And Gabi – Eve Gets Fired 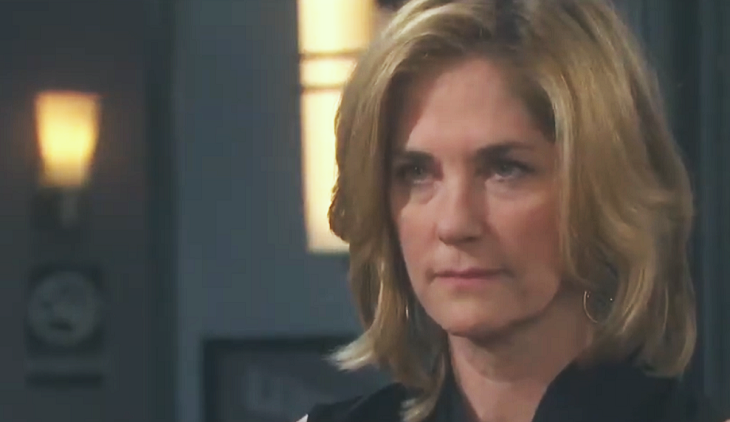 Days of Our Lives Nicole Walker (Arianne Zucker) goes to Andre DiMera’s (Thaao Penghlis) Chicago hotel room. Nicole reveals herself as Kristen Dimera (Stacy Haiduk). Kristen tells Tony about DiMera and wants him to marry Nicole so she can run the company. Tony wants nothing to do with Nicole.

Kristen promises to run the company and not wear the mask around Tony. Tony says he cannot marry Nicole because he is married to Anna DiMera (Leann Hunley). Tony cannot and will not come back to Salem with a young wife. When Kristen threatens to throw Tony out of his apartment, he agrees to marry “Nicole”. Then he asks her how she is going to explain being married to a dead man.

Days of Our Lives Gabi Hernandez (Camila Banus) tries to convince Stefan DiMera (Brandon Barash) to marry her. Stefan agrees, but they have to have a prenuptial agreement. Gabi argues that she stood by Stefan when no one else would. Gabi and Abe both point out that the board loves Gabi and her company.

Abe can marry them if they want him to – he still has his officiant’s license. Stefan argues it is not about trust – he would be an idiot not to have a prenup. Stefan hesitates, and Gabi starts to leave, he stops her and tells her he will marry her.

Days of Our Lives Eve Deveraux (Kassie DePaiva) threatens to smash the serum. Jack tries to fool Eve by saying he is mad at her and begs her not to destroy it. Eve plays along and kisses Jack before smashing the vials. Jack calls her a bitch and demands a divorce.

Jack calls the lab that made the serum for him only to find out Eve has shut them down. Jennifer and Eve go to the police station to confront Eve, who claims the lab was making illegal drugs and she had to shut them down. Jack knows did it for spite – if she can’t have him than neither can Jennifer.

Days of Our Lives Sonny Kiriakis (Freddy Smith) wants to send the mask back to Susan Banks (Stacy Haiduk). Brady Black (Eric Martsolf) doesn’t want to talk about Susan. Sonny brings up Titan’s problems and asks Brady if he is going to take advantage of it. Brady tells Sonny about Nicole’s plan to marry a DiMera. Brady plans to take full advantage of Stefan losing his spot as the head of Dimera.

As always, more detailed spoilers and a full collection of pictures for the week in question will appear here on Soap Opera Spy, when there could be more clues and hints over exactly what’s going on. Days of Our Lives airs weekdays on the NBC network. Read more news, spoilers, and gossip on our Days of Our Lives homepage.