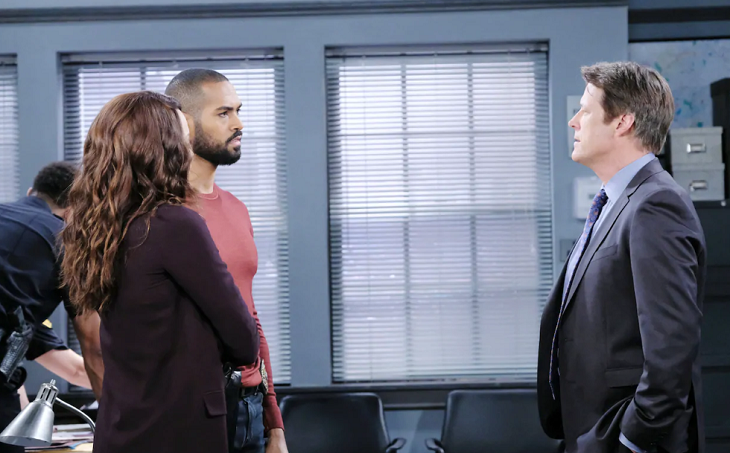 “Days of Our Lives” spoilers for Tuesday, July 30, tease that Jack Deveraux (Matthew Ashford) will select a replacement for Eve Deveraux (Kassie DePaiva). He was furious after Eve destroyed the serums and put the notes that could make more in the shredder, so he cut Eve loose at the Salem PD. Now that Eve’s been fired, Jack will have to figure out someone who can fill the role of police commissioner.

Luckily, Eli Grant (Lamon Archey) will be up for the challenge. He’ll accept Jack’s offer in Tuesday’s DOOL episode, so it won’t be long until word spreads around the station. Rafe Hernandez (Galen Gering) will be surprised to hear Eli’s his boss now, but he should have a congratulatory message for him anyway.

Of course, Lani Price (Sal Stowers) will be ecstatic over her fiancé’s exciting new gig. She’ll celebrate with Eli later this week, so “Elani” fans won’t want to miss all the fun.

Until then, we’ve got two weddings to plan! Stefan DiMera (Brandon Barash) and Gabi Hernandez (Camila Banus) will kick into high gear as they try to throw together these important nuptials.

Meanwhile, “Days of Our Lives” spoilers say Kristen DiMera (Stacy Haiduk) and Tony DiMera (Thaao Penghlis) will have their own wedding to worry about. “Nicole Walker” (Arianne Zucker) is set to tie the knot with Tony as part of her plot, but there’ll be a snag soon.

Tony will suddenly vanish within the next episode or two and leave “Nicole” reeling, but Kristen will work hard to track down her husband-to-be.

Over with Jennifer Horton (Melissa Reeves), she’ll fume about all the destruction Eve’s caused. “Days of Our Lives” spoilers state that Jenn will really let Eve have it on Tuesday!

They’ll have an intense showdown over Eve’s treatment of Jack, but Eve won’t particularly care what Jennifer thinks. She’ll defend her actions and make it clear that Jack will never love Jennifer without his memories.

Days of Our Lives #DOOL Spoilers: Brandon Beemer Reveals When He Will Be Back On DOOL @celebratesoaps https://t.co/FujWDvNp5H

Fortunately, “Days” viewers know Jack and Jenn’s love is stronger than that! In fact, we’re betting it’s powerful enough to bring Jack’s memories back without the serum. It may take some time, but there’s certainly hope for the future.