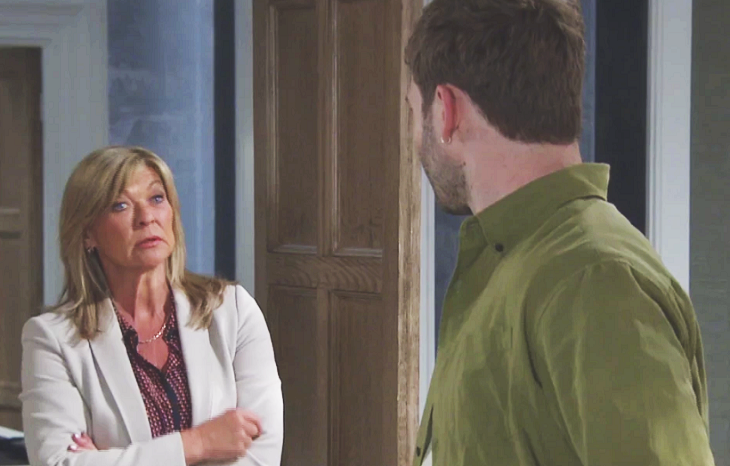 It’s going to be an intense mother and son showdown between Kim Tate (Claire King) and Jaime Tate (Alexander Lincoln). The multi-millionaire businesswoman discovered her son tried to con her into signing away her shares of the vets to him.

Jamie, who is fed up with his mother’s controlling behavior, tried to manipulate her into doing just that by telling her that Rhona Goskirk (Zoe Henry) is bullying him and that owning her shares will help him earn the respect of others. In order for his scam to be successful, he enlists the help of Rhona, Vanessa Woodfield (Michelle Hardwick) and Paddy Kirk (Dominic Brunt).

However, Kim discovers Jamie’s plan when Millie Tate (Willow Belle) accidentally started a video call with her, which allowed her to overhear Jamie talking to his wife Andrea Tate (Anna Nightingale) about his actions.

Emmerdale Spoilers – Nothing Has Been Signed – What Will Kim Tate Do?

The turnover papers haven’t been signed yet and viewers have yet to find out what Kim’s next move will be. Viewers know that Kim is not someone to mess with, and she surely won’t allow anyone to make a fool out of her.

Some fans of the show believe that Jamie might be next on Kim’s hit list. Viewers may recall that she had her step-grandson Joe Tate killed after he tried to take her money.

One fan wrote: “Never mess with Kim” and another said: “Haha yes now y’all can all lookout. Kim knows u tried to play her. She won’t be happy awesome #emmerdale.”

Emmerdale Spoilers – Risha And Manpreet Sharma Could Lose The Factory

Elsewhere, Kim forced Rishi Sharma (Bhasker Patel) and Manpreet Sharma (Rebecca Sarker) into accepting a loan order, so they can save the factory. Rishi and Manpreet revealed to their children Jai (Chris Bisson) and Priya (Fiona Wade) that they might lose the factory. In a last-ditch effort to save their business, he turned to Kim, who immediately sensed an opportunity to exploit a man who is in desperate need.

Emmerdale Spoilers: Amy Decides To Fight For Custody Of Kyle

However, Rishi and Manpreet regretted their decision to ask for Kim’s help after seeing her terms for the loan. Rishi kept the loan a secret to his children and promised Manpreet that he could get a better deal with Kim.

However, Kim won’t budge and told him to take her offer or leave it. Rishi had no choice but to make a decision that he will most likely regret in the future.