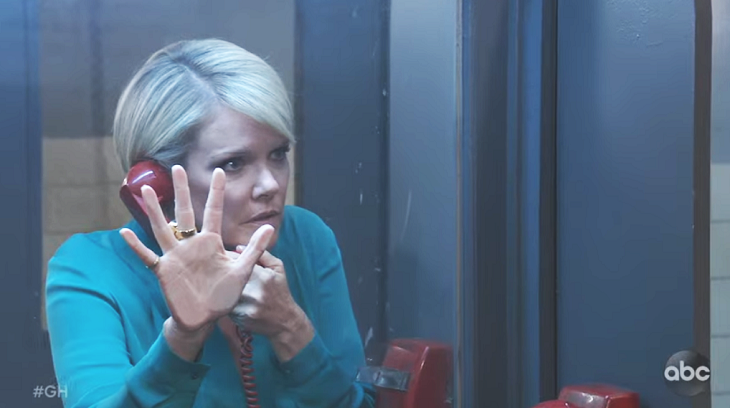 “General Hospital” spoilers for Tuesday, July 30, tease that Stella Henry (Vernee Watson) will get some surprising news from Jordan Ashford (Vernee Watson) and Curtis Ashford (Donnell Turner). She’ll learn the long-lost relative that’s turned up has a closer connection than they thought. Based on GH’s weekly promo, it seems Stella will face accusations of hiding a son or daughter.

Stella will fly into a rage and argue that she doesn’t have some secret lovechild roaming around. She’ll think Jordan and Curtis are being ridiculous, but they may not know what to believe after looking at the evidence. Meanwhile, Sasha Gilmore (Sofia Mattsson) will have a strategy session with Valentin Cassadine (James Patrick Stuart). She’ll think they should nail down how they’re going to handle Liesl Obrecht (Kathleen Gati).

Sasha won’t want Liesl spilling the truth and hurting Nina Reeves (Cynthia Watros). She won’t want this threat to mess things up with Michael Corinthos (Chad Duell) either, so she’ll hope Valentin has a plan. Nearby, Liesl will listen in on Valentin and Sasha’s chat. She’ll want to know what they have in store for her so she can shut it down fast!

Other “General Hospital” spoilers say Kim Nero (Tamara Braun) will be taken aback by Drew Cain’s (Billy Miller) updates. He’ll let her know that Oscar Nero Quartermaine (Garren Stitt) had one last gift for him – and it was something from his past. Drew will explain the medal situation, and they’ll agree they had a fine boy.

It’s painful to think about this being Oscar’s final gesture, but perhaps it’ll move Drew in the direction of leaning more about his history. GH viewers are curious to know what other secrets are buried. Across town, Jason Morgan (Steve Burton) will want to get something straight with Shiloh Archer (Coby Ryan McLaughlin). He’ll make it clear that Shiloh shouldn’t approach his family again.

However, Shiloh typically does what he wants and ignores the potential consequences. He should be careful or one day his luck’s going to run out!

Elsewhere, Lulu Falconeri (Emme Rylan) will spend the day reflecting on the changes in her life and pondering what’s next. Truly letting go of Dante Falconeri (Dominic Zamprogna) is going to be difficult, but it seems necessary at this point.

Finally, Ava Jerome (Maura West) will realize her mission is futile. She’ll hope to get some form of remorse out of Ryan Chamberlain (Jon Lindstrom), but he’s just not capable of that. “General Hospital” spoilers suggest Ava may need another plan if she wants to win Kiki over in the afterlife.

GH fans won’t want to miss all the excitement on Tuesday. We’ll keep you posted as other details and rumors emerge. Stay tuned to the ABC soap and don’t forget to check Hollywood Hiccups often for the latest “General Hospital” spoilers, rumors, updates and news.