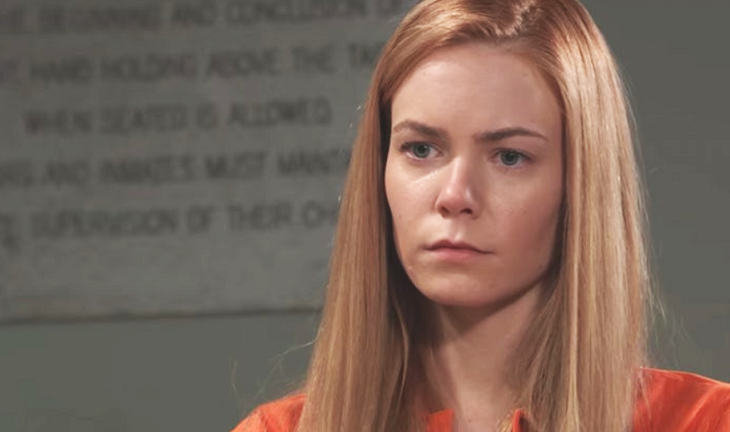 General Hospital spoilers tease that Nelle Benson (Chloe Lanier) might do an about face and make a confession that will change the lives of many different people in Port Charles. After all, if there’s one person who knows the real truth about Baby Wiley, it’s his biological mother, Nelle Benson. Here’s what you need to know.

Michael Corinthos (Chad Duell) has been thinking about his supposedly deceased son lately, and especially when Nelle calls and asks that he visits. While there’s no doubt that Carly Corinthos (Laura Wright) is against the idea, if Nelle does end up telling Michael that Baby Wiley is actually his biological child, this might change everything.

And believe it or not, it might also protect the baby from some people who have been desperately trying to get his hands on him, including evil Dawn of Day cult leader, Shiloh Archer (Coby Ryan McLaughlin).

General Hospital Spoilers – Nelle Benson May Be Regretting Her Decision

Nelle might have made her mistakes in the past, but this time around, it’s different.

Co-head writer Shelley Altman recently told ABC Soaps in Depth in an interview, “If she could go back to that time, she would wish that she could take a different direction. But she doesn’t know how to live any other way but by her wits.

“So, I wouldn’t say that she has regrets, but there’s certainly a wistful quality. Like, ‘Had things gone well with Michael, I might not have had many some of these other decisions.”

General Hospital Spoilers – She Could Alter The Course Of Numerous Lives

General Hospital spoilers tease that Nelle will find herself in a position to alter the course of numerous lives with one simply but impactful confession. If sounds like we have been here before, it’s because we have!

But this time around it’s different. That’s because it appears as though Nelle is ready to tell the truth. Until, that is, a twist of technological fate changes everything!

General Hospital Spoilers: Michael And Sasha Heat Up On Sonny’s Island – Romance Is In The Air! https://t.co/uVYKXpx0oe pic.twitter.com/bDBUraoxuj

With that said, fans will simply have to tune in to find out what will happen next! We have a feeling that things are going to explode and in more ways than one. What do you think?