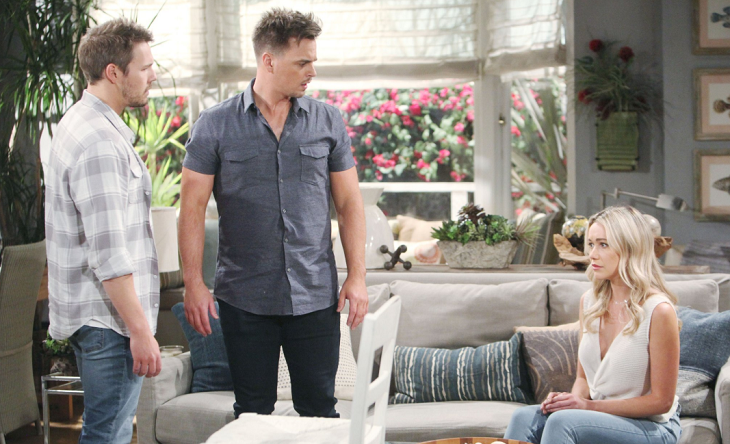 The Bold and the Beautiful spoilers tease that Florence “Flo” Fulton (Katrina Bowden) will come to a big realization. As B&B viewers know, she was a key part of Reese Buckingham’s (Wayne Brady) baby swap and adoption scam, as she played the role of birth mother to the baby that Steffy Forrester (Jacqueline MacInnes Wood) adopted and named Phoebe Forrester (River Davidson and Madeline Valdez).

Of course, Flo later found out that the baby was Hope Logan (Annika Noelle) and Liam Spencer’s (Scott Clifton) daughter Beth Spencer. She had a chance to come clean to Hope and Liam right then and there, but she decided to keep the secret to herself, at the urging of Reese, Zoe Buckingham (Kiara Barnes), and Shauna Fulton (Denise Richards). And the secret has been tormenting her ever since.

Well, in recent weeks, Thomas Forrester (Matthew Atkinson) found out about the Beth/Phoebe secret, and he started threatening Flo and everyone else who knew about the secret to keep their mouths shut. Flo has been on the verge of spilling the truth on more than one occasion, but Thomas has stopped her each time – and the last time he essentially threatened her life if she dared to tell anyone what she knows.

But now that Thomas has married Hope, Flo feels like she just can’t take it anymore. She doesn’t want to see her cousin married to someone she doesn’t love, and the whole situation is really upsetting Flo. Plus, Wyatt Spencer (Darin Brooks) has been questioning her about what she’s keeping from him, and she doesn’t want to keep lying to Wyatt.

And then something will happen. The Logan women will get together and the subject of Thomas’ past will come up. Hope will be stunned as Katie Logan (Heather Tom) and Donna Logan (Jennifer Gareis) recount Thomas’ troubled past and his history of violent behavior. That will be enough for Flo, and having heard all of this disturbing information, she’ll decide to come clean to Hope.

But before she can get to Hope, she’ll be confronted by Liam. As B&B viewers know, Liam has been doing some sleuthing on his own regarding Phoebe’s adoption, and he will have received information that will lead him to believe that the big secret she’s keeping is that Phoebe is really Beth, and that she never gave birth to a child at all.

Bold And The Beautiful Spoilers – Flo Fulton Will Completely Break Down

According to B&B spoilers, in front of both Liam and Wyatt, Flo will confess everything, including all the details about Reese, the baby swap, her role as “birth mom,” and how Thomas found out about the secret and threatened her life if she told. Flo will completely break down as she gives an emotional confession and finally rids herself of the terrible secrets she’s been keeping.

It will be an emotional scene for sure, as Liam learns additional details about the whole saga, and Wyatt learns about the depths of Flo’s deception for the first time. As B&B viewers know, Wyatt was previously under the impression that Flo was an honest and trustworthy person. He’ll be completely stunned to learn about what she did and how she turned so many lives upside down.

Of course, from there, Liam will want to race to tell Hope about their daughter being alive, but as for Wyatt, he’ll be left with an emotionally drained Flo. How do you think he’ll respond to Flo after hearing her big confession?