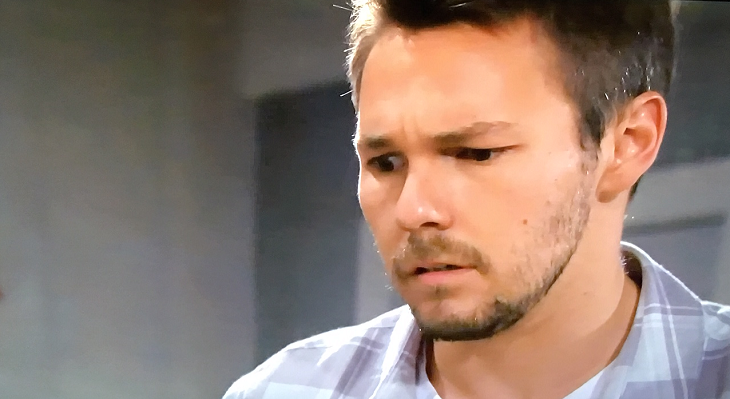 The Bold and the Beautiful spoilers for Wednesday, July 31, tease that Liam Spencer (Scott Clifton) will be absolutely rocked to his core as he slowly starts to realize what Douglas Forrester (Henry Joseph Samiri) has been trying to tell him. As B&B viewers know, Liam came to a sudden realization as he was telling Steffy Forrester (Jacqueline MacInnes Wood) about Douglas claiming that Beth Spencer was alive.

And then Liam found Douglas standing at Phoebe Forrester’s crib, only to hear Douglas subsequently say that Phoebe was Beth. Of course, Liam has been feverishly trying to get to the bottom of the big secret that Thomas Forrester (Matthew Atkinson) is holding over Florence “Flo” Fulton’s (Katrina Bowden) head. He’s been digging around in the adoption records and hoping for some information from the Las Vegas hospital where Flo allegedly gave birth to Phoebe.

But little did Liam know that he’d get the answers he was looking for from Douglas. Of course, there’s much more for Liam to do, in order to secure proof that what’s now swirling around in his head is the truth…that Phoebe is Beth, that Flo was part of a sham adoption and never gave birth to a baby, and that Thomas has been privy to the secret and kept it from everyone.

On Wednesday’s episode, look for Liam to continue to put the pieces together. He’s got more investigating to do, and ongoing B&B spoilers indicate that he won’t yet tell Steffy about what he’s thinking, but he will want to get enough proof so he can tell Hope Forrester (Annika Noelle) that their daughter is alive and well. Of course, Liam is also aware that Thomas is currently alone with Hope, and he’ll want to do whatever he can to get Thomas away from her.

The Bold and the Beautiful Rumors: Steffy’s Pregnant, Liam Becomes a Father For The Third Time? @celebratesoaps https://t.co/O0CEvGTBfy

It sounds like we’re in for some exciting scenes as Liam tries to reconcile everything that’s happened and everything he now suspects. He may think back to Catalina Island and realize that if it’s indeed true that Beth is alive, then she must have been somehow stolen from Hope after she gave birth. Look for some big drama as Liam strives to put all the details together and make sense of everything.

Meanwhile, on Wednesday’s new episode of B&B, Flo will find herself on a mission. As B&B viewers know, she quickly bolted from a conversation with Katie Logan (Heather Tom), Brooke Forrester (Katherine Kelly Lang), and Donna Logan (Jennifer Gareis) after learning about his troubled past, including how he set a residence on fire and pushed Rick Forrester (Jacob Young) out of a window at Forrester Creations.

Bold And The Beautiful Spoilers – Thomas Forrester Has Doled Out Threats

Flo wasn’t previously aware of Thomas’ violent tendencies, but she does know something that the Logan sisters don’t – that Thomas has been doling out threats right and left over the Beth secret. He’s threatened to make sure that Flo and Zoe Buckingham (Kiara Barnes) go to prison if the secret is ever revealed, and he threatened Emma Barber (Nia Sioux) and followed her after she declared that she was going to reveal the secret.

Of course, Emma later turned up dead, and that’s bothered Flo for weeks now. But now that she knows about the things that Thomas has done in the past, it’s just too overwhelming for her. She’s afraid that Hope is in real danger being alone with Thomas, especially since she believes there’s a good chance that Hope will reject Thomas’ advances on their honeymoon together.

It looks like Flo will start by wanting to confess to Wyatt Spencer (Darin Brooks), but before she can get to Wyatt, she’ll encounter her mother, Shauna Fulton (Denise Richards). According to B&B spoilers, Shauna will intercept Flo somehow and she’ll surely notice that Flo is distraught.

Shauna will then do her best to try to stop Flo from confessing to Wyatt. She’ll probably give Flo the same old song and dance about not wanting to rock the boat on her new life as a Logan, and about how Phoebe/Beth is in a happy home and that she shouldn’t cross Thomas.

But it looks like Flo is going to be determined this time – she may have caved to her mom’s pressure before, but this time she’ll have a strong resolve to find Wyatt and tell him everything.

Ongoing B&B spoilers indicate that Flo will indeed find Wyatt, and an explosive scene will result from there! B&B viewers will have to keep tuning in to watch the drama unfold!