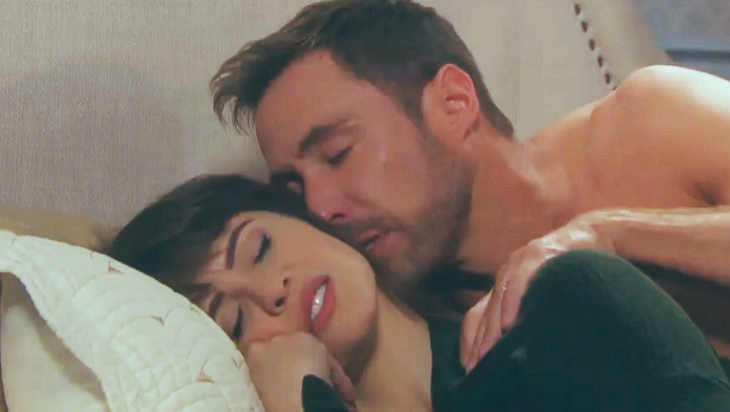 Days of Our Lives spoilers tease that there are five key weekly takeaways for viewers to watch for.

The marriage – and partnership – of Jack and Eve Deveraux (Matthew Ashford and Kassie DePaiva) continues to disintegrate this week. Jack’s eyes have been opened to Eve’s lies and manipulation of him. Last week, viewers saw Jack catch Eve red-handed as she put Dr. Wilhelm Rolf’s (William Utay) formula diary, and other formulas in a garbage can and set fire to them.

Jack also found out that Eve had tried to trick him with a placebo of the memory serum, and then threatened to smash the package of serum and antidote. This was the only hope for Jack to ever regain the memories of his family.

While there is a possibility that Xander Kiriakis (Paul Telfer) might have made copies of the formula diary while he had it, and Rex Brady (Kyle Lowder) may have as well, anything remaining kept in the Salem University Hospital laboratory is gone. Eve called a police raid to confiscate the items and have them destroyed. Jack will not only seek a divorce from Eve, he will also fire her from her position as Police Commissioner and hire Eli Grant (Lamon Archey) in her place.

Also this week on Days of Our Lives, Hope Brady (Kristian Alfonso) will start becoming suspicious of Ted Laurent (Gilles Marini). It looks like this will start with Will Horton (Chandler Massey) pointing out discrepancies in Ted’s story to Hope. Will has apparently started back to work at the Salem Spectator, so this may be a story that he has been writing about Ted’s kidnapping and accusations of Stefan DiMera (Brandon Barash). Or it may just be a piece about Ted in general since he’s in the news and Will finds discrepancies in his background information.

However the details play out, Will and Hope’s conversation will lead her to become suspicious of Ted. She will start to have her doubts about him and snoop around in his apartment, where she will make a stunning discovery, possibly what appears to be rolls of large denomination cash as shown in the Days of Our Lives weekly promo video. Hope will then confront him about the discovery and likely the discrepancies as well.

Kristen DiMera (Stacy Haiduk) continues to plot to take over DiMera Enterprises and unseat Stefan this week on Days of Our Lives. She will travel to Chicago where she opens a door to a home with her key and unveils an alive Tony DiMera (Thaao Penghlis), sitting in a wheelchair looking out a window. She unveils herself to Tony as Kristen, his half-sister. Although some Days of Our Lives viewers have their doubts that it’s really Tony, since he never met Kristen.

His twin Andre (Thaao Penghlis) impersonated him for over 20 years while he was held captive on a deserted island and Andre does know Kristen, even though both were thought to be dead. She tells her tale of wanting to make DiMera Enterprises hers, even though Tony was the original founder, , and that she needs Tony to “marry” her. This, of course, will be invalid since she will be masquerading as Nicole Walker (Adrienne Zucker). Tony hesitates, holding out hope that Anna DiMera (Leann Hunley), will come back to him, but he finally agrees.

She then goes back to Salem, and as Fake Nicole, ropes Brady Black (Eric Martsolf) into coming back to Chicago with her to convince Tony to marry her. Fake Nicole and Tony marry, and when they return to Salem, where Tony and Fake Nicole run into Eric Brady (Greg Vaughan) and Fake Nicole tells Eric she and Tony got married. Eric is shocked and dismayed and then finds out Brady assisted in the process by witnessing the union. Eric feels Brady failed to protect “Nicole” from what he is sure is a potentially deadly mistake. Brady walks up and Eric goes ballistic, pushing him through the door of the Salem Inn.

Meanwhile, back in Salem, Gabi Hernandez (Camila Banus) convinces Stefan to marry her so that she can take over as CEO of DiMera until he is cleared of his criminal charges. Gabi, however may or may not stay CEO and may still be planning to dump Stefan after she’s in power – depending on if she can fight off her feelings for him!

They marry in the living room of the DiMera mansion, probably officiated by Abe Carver (James Reynolds), and advise DiMera board member Mr. Shin (Michael Hagiwara) that they have married so that Gabi now can lobby to become the CEO. Then Tony and fake Nicole arrive while Mr. Shin is at the mansion. Fake Nicole disrupts the meeting by telling him that she is also Mrs. DiMera! Gabi and Nicole then battle for the CEO position.

5. Beginning Of The End For Sarah Horton And Rex Brady

Last but not least, it’s the beginning of the end for Sarah Horton (Linsey Godfrey) and Rex Brady’s (Kyle Lowder) very new marriage. They are shown in the weekly Days Of Our Lives promo video in bed, and as Rex sweetly tells her how much he loves her, she responds to him that she loves him too, but calls him Eric!

She’ll come clean to Rex about her feelings for Eric, and she may try to make a good case to him that even though she’s having difficulty getting rid of her Eric feelings, she married Rex. However, as Days of Our Lives viewers know, Rex will leave town when Kyle Lowder exits the show’s canvas, so Rex won’t bite when she tries to get him to stay with her.