Days Of Our Lives Spoilers: Gabi And Nicole Battle For The DiMera CEO Position 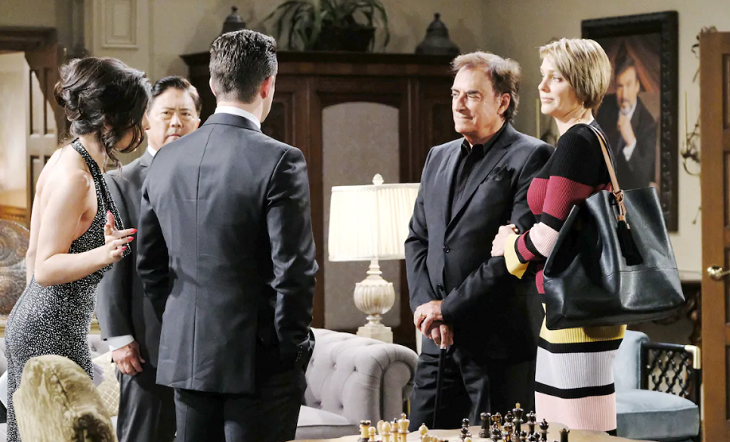 Gabi will convince Stefan to marry her, after some begging and convincing, and they will notify DiMera Enterprises board member Mr. Shin (Michael Hagiwara) that they are married and that Gabi, as CEO of her own company, Gabi Chic, is fit to run the company.

At the same time, fake Nicole will show up with Tony DiMera (Thaao Penghlis), who she convinced to play husband with her after taking off her disguise and revealing herself as Kristen, and explaining her plans to him. Tony, too took some convincing, as he has been holding out for his apparently ex-wife Anna DiMera (Leann Hunley) to take him back.

Knowing that Brady Black (Eric Martsolf) also wants to take Stefan down, she brings him into the mix. She involves him into helping her look for Tony and talk him into marrying her so she will be a DiMera and they can all take down Stefan and take over DiMera together. Brady is oblivious to the fact that fake Nicole already set things up with Tony.

She also has another goal, and that is to emotionally crush Eric Brady (Greg Vaughan) as if he weren’t crushed already. She wants to make sure when they all get back to Salem that he knows “Nicole” married someone else and that Brady was in on it. Eric is so upset he attacks Brady for letting her marry Tony, not feeling it was a wise decision on her part and could lead to only more hurt for her!

Days of Our Lives viewers can’t help but wonder if it is really Tony, and not Andre impersonating Tony who agrees to marry Kristen as Nicole to help take over DiMera from Stefan. However, this isn’t the first time that Tony got involved with a half-sister. Longtime Days of Our Lives viewers will recall that back in 1982, he proposed marriage to Renee DuMonde (Philece Sampler) but she broke off their engagement after finding her mother, Lee DuMonde’s (Brenda Benet) diary. She found out Stefano DiMera (Joseph Mascolo) was her father too.

Days Of Our Lives Spoilers – Who Will Mr. Shin Give The CEO Position To?

In 1994 Kristen, then Kristen Blake and played by Eileen Davidson, married Tony to keep a promise to an ailing Stefano. But the thing is, Kristen is not a true blood DiMera. She and her brother Peter Blake (Jason Brooks) were adopted by Stefano. To top it all off, the 1994 marriage to Tony wasn’t really to Tony – it was to Andre, who was impersonating him.

A photo still in Soap Opera Digest’s latest edition shows Gabi and Stefan and Tony – or is it Andre – and Kristen in her Nicole costume in what appears to be the DiMera mansion living room trying to convince Mr. Shin who will be the best Mrs. DiMera to take the job. Gabi and fake Nicole will battle with each other and possibly the one with the worse temper, fake Nicole, will battle with Mr. Shin if he doesn’t give the job to her!

Stay tuned to Days of Our Lives and keep checking Days of Our Lives spoilers frequently for all the latest news, updates and developments, and to see how the battle of the DiMera wives for the position of DiMera Enterprises CEO all plays out!