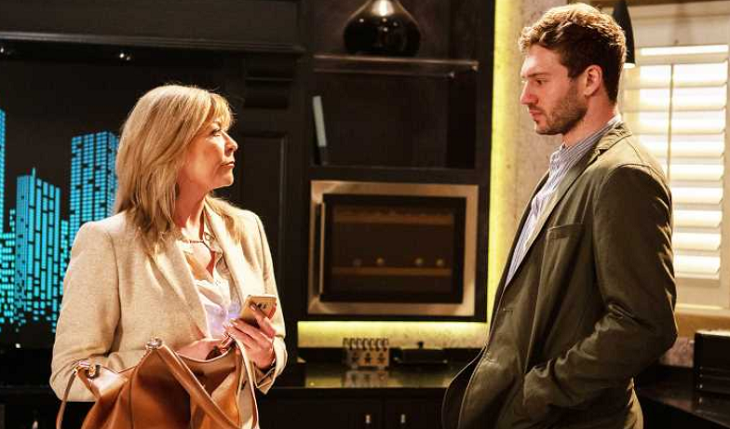 On “Emmerdale,” Jamie Tate (Alexander Lincoln) will decide to stay in the village, after accepting Kim Tate’s (Claire King) generous offer. Kim offered to still sign over her shares to him, even though he tried to con her.

What’s more surprising was the fact that Kim has no ulterior motive for doing this. She told Graham Foster (Andrew Scarborough) that she just wanted to do what’s right.

Although Andrea Tate (Anna Nightingale) still has reservations as to the trustworthiness of Kim, she respected her husband’s decision to stay at Home Farm. Will viewers see more of Kim’s softer side? Or is she planning something devious?

Jamie had enough of his mother’s over-controlling attitude and he decided to hit back. He tried to regain control of his life by manipulating Kim into signing away her shares of the vets to him. Of course, he couldn’t pull this off alone.

He worked with Rhona Goskirk (Zoe Henry), Vanessa Woodfield (Michelle Hardwick) and Paddy Kirk (Dominic Brunt) to pull the con. He even told Kim that Rhona was bullying him and that he could get some respect if he owned some shares.

Unfortunately, things didn’t go as planned. He discussed his plans with his wife Andrea, but he didn’t know that Millie just started a video call with Kim and Kim heard everything he said.

Emmerdale Spoilers – Is The Mother And Son Relationship Back On Track?

The paperwork hadn’t been signed yet, so Kim still had a chance to back out. Some viewers even thought that she might do something sinister to Jamie or worse, kill him because of what he did. Fortunately, that didn’t happen.

NEXT WEEK’S SPOILER PICS ARE UP! Check them out: https://t.co/RBN44Y6Av7 #Emmerdale pic.twitter.com/R8JZp3uAy6

“Emmerdale” spoilers reveal that after Kim made the generous offer, Jamie consulted Rhona and Andrea and asked what he should do. They were both second-guessing Kim’s motives, and they were right to do so. Andrea has doubts if Kim can be trusted while Rhona believed that Kim has plans to get revenge after she found out that Jamie had tried to double-cross her.