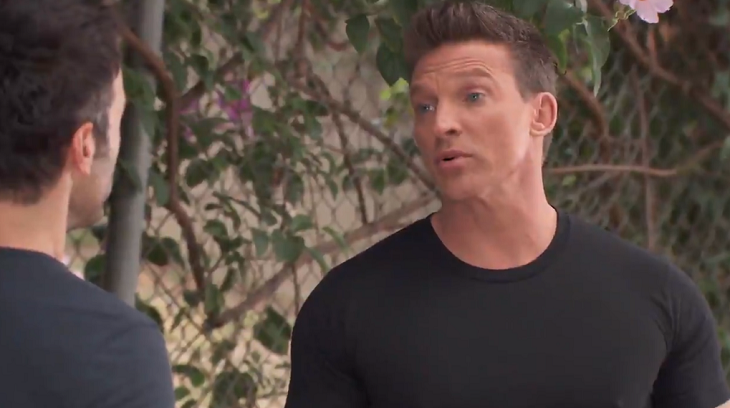 Danny’s ball rolls to Shiloh Archer (Coby Ryan McLaughlin) who asks if he remembers him. Shiloh asks Danny if his parents are around. Jason sends Danny back to Sam and tells Shiloh not to approach his family again. Jason threatens to beat Shiloh in front of Danny.

Danny asks if he did something wrong, Sam and Jason both tell him no. Jason tells Danny if Shiloh approaches him again to let them know they will take care of him. Jason tells Sam that Danny trusts them to deal with Shiloh; they need to do that. Sam and Jason talk about DOD falling apart. Jason says Shiloh has another trick up his sleeve.

General Hospital’s Drew Cain (Billy Miller) shows Kim Nero (Tamara Braun) the medals. Drew wishes Oscar Nero (Garren Stitt) could have seen them. Kim asked Drew if there is paperwork with medals. Kim suggests Drew contact another seal about Shiloh. She tells Drew that the medals provide a way into his past. Drew says Oscar requesting those medals gave him another way to look into his past. While Drew is out of his office, someone breaks in and steals the flash drive.

General Hospital’s Stella Henry (Vernee Watson), Curtis Ashford (Donnell Turner), and Jordan Ashford (Briana Nicole Henry) are discussing his new job. Jordan asks Stella about the DNA search and Marcus Godfrey (Nigel Gibbs). Jordan had a friend check into the DNA markers, and Stella’s relative is much closer than they thought. Jordan tells Stella her relative is from Port Charles.

General Hospital’s Peter August (Wes Ramsey) goes to visit Lulu Falconeri (Emme Rylan) with the pretense of looking for his wallet. Lulu is drunk and talking about how remarkable she is. Peter tells Lulu that Dante Falconeri (Dominic Zamprogna) is an idiot. Lulu is furious that Peter thinks that and goes on the defensive. Lulu tells Peter that Dante is sick, and that is why he is staying away.

General Hospital Spoilers – Sasha Gilmore Is Moving Into Her Own Place

General Hospital’s Valentin Cassadine ( James Patrick Stuart) arrives on Spoon Island with Liesl Obrecht (Kathleen Gati) and is greeted by Nina Reeves (Cynthia Watros) and Sasha Gilmore (Sofia Mattsson). Sasha tells Nina that she is moving into her own place and staying in Port Charles. Nina is happy that Sasha has Michael Corinthos (Chad Duell) and cannot wait until her wedding in September. Valentin tells Liesl he is not the one who pushed her into the water this time.

General Hospital’s Ava Jerome visits Ryan Chamberlain at Pentonville. Ryan talks to Ava about her Crimson article. Ava tells Ryan this is not a social call. He tells Ava that his kidney was stolen then asks  what she needs from him. Ava wants Ryan to help put Kiki Jerome’s (Hayley Erin) soul at ease. She wants Ryan to apologize to Kiki and let her go. Ryan tells Ava that the dead are dead and suggests Ava needs to seek help.

Ava tells Ryan that she doesn’t believe that he has a soul, but Kiki did. Ava tells Ryan whoever stole his kidney should not have stopped there. She tells Ryan if he ever loved her, he would let her go. Ryan asks why he would let something he loves that much go; she begs him to do just that. Ryan doesn’t regret doing anything that gave him more time with her. Ava brings up Rape by Deception, Ryan disagrees. Ryan tells Ava if her psychic is right, they are bound together.