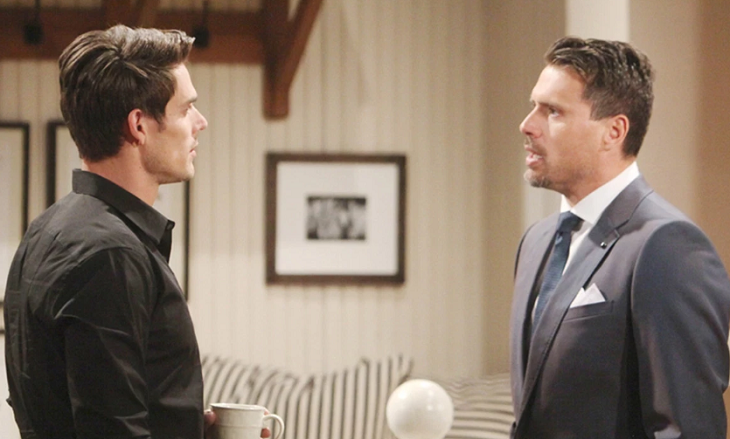 Last week on The Young And The Restless (Y&R), Judge Sanchez (Joseph C. Phillips) decided both Nick Newman (Joshua Morrow) and Adam Newman (Mark Grossman) are equally terrible people and Christian shouldn’t be with either of them.

How many of us wanted to high five that judge?! He saw it like it was and Christian was placed into the hands of their sister Victoria Newman (Amelia Heinle). Nick was devastated, of course. But did he really think his little stunt, posing as JT Hellstrom (Thad Luckinbill), would never come back to bite him?

Another enjoyable scene this week was when the Scooby Gang, as Phyllis Summers (Michelle Stafford) dubbed them, sat around at Y&R’s Chancellor Park, giving Victoria advice on raising Christian. Chelsea Newman (Melissa Claire Egan) and Sharon Newman (Sharon Case) told Victoria about all the little nuances Christian loves. When Phyllis arrived, Chelsea immediately got up and left.

Young And The Restless Review – Scoping Out The Next Rich Retiree?

“I guess she has to go scope out all the early bird diners for her next rich retiree?” Phyllis quipped. And she is so right. Con artist Chelsea has been acting high and mighty since she returned. But it’s obvious she married Calvin Boudreau (John Burke) for his money. She’s also completely snubbed Adam and is acting as though she hadn’t just up and left Nick and Christian in the middle of the night just over a year ago.

Meanwhile, it looks like Lola Rosales (Sasha Calle) hasn’t quite completed her emasculation of Kyle Abbott (Michael Mealor). It’s not enough that he follows her around like a lapdog, now she’s got to investigate his past, because he may have done some things she wouldn’t have approved of. You know, before he even knew she existed.

This should be raising all kinds of red flags for Kyle. It is raising concerns for his friend Theo Vanderway (Tyler Johnson), and rightly so. But instead of reiterating his concerns to Kyle about how his personality has done a complete 180, he went behind his friend’s back and straight to Lola’s momma, Celeste Rosales (Eva LaRue). He told the whole sordid liver transplant story and Celeste was shocked. It did, however, provide a sweet scene between mama Rosales and Phyllis.

There was also a heartwarming scene between Celeste and Summer Newman (Hunter King). Summer admitted she took advantage of Kyle’s desperation and then she took all the blame for the situation. This character has been maturing a lot in the last few months, much more so than Lola.

All this, however, led to Celeste’s decision to go back to Miami. But wait a second, didn’t Celeste arrive in Genoa City like five minutes ago? She’s already leaving? How disappointing.

And speaking of the Rosales family, Rey Rosales (Jordi Vilasuso) finally broke up with Sharon this week. What a relief – now viewers won’t have to sit through any more of their awkward Y&R love scenes. Sharon and Rey’s relationship has felt forced since it started – there’s never been much chemistry between these two. Sharon and Adam, on the other hand, are smoking hot together! I’m looking forward to some scorching, long overdue Shadam love scenes coming up on Y&R in the near future.

The Young and the Restless (YR) Spoilers: Adam And Nick War Heats Up – Christian Pays The Price https://t.co/kzRCMZam2z pic.twitter.com/oHYV5yE3qh

Are you glad that Shey is finally over? And are you sad to see Celeste leaving already? Let us know in our comments section.