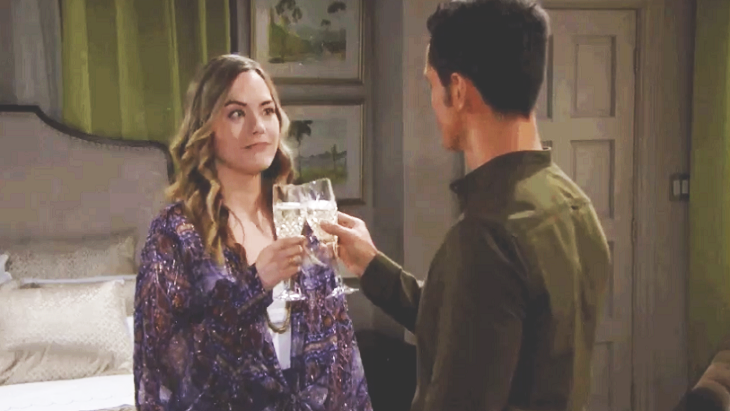 The Bold and the Beautiful spoilers for Thursday, August 1, tease that Thomas Forrester (Matthew Atkinson) will have another sneaky plan up his sleeve. As B&B viewers know, Thomas wants nothing more than consummate his marriage to Hope Forrester (Annika Noelle), and it looks like he’ll stop at nothing to make that happen. But Hope isn’t cooperating with Thomas’ plan, as she can’t seem to get Liam Spencer (Scott Clifton) and Beth Spencer off of her mind.

Well, it seems that Thomas may once again turn to using drugs to get what he wants. On Thursday’s episode, he’ll meet up once again with his old friend Vincent Walker (Joe LoCicero) – the same friend who gave Thomas the drugs that he put in Liam’s drink during the beach party at Steffy Forrester’s (Jacqueline MacInnes Wood) house. Those drugs ended up making Liam euphoric and he wound up sleeping with Steffy while under the influence.

According to B&B spoilers, Vincent will have a special “gift” for Thomas to give to his new wife…a gift that Vincent knows that Thomas will enjoy. Although it’s a terrible thought, the gift may be more drugs for Thomas to use on Hope to make her more amenable to his physical advances. As B&B viewers know, Hope has been resisting Thomas’ advances thus far and she’s pretty much given him every possible excuse.

Hope is simply too hung up on Liam and the life she lost with him and Beth to even think about being physically intimate with Thomas right now. Unfortunately, it looks like Thomas will slip the drug from Vincent into Hope’s champagne, since he’s just ordered room service. B&B viewers will have to watch to see exactly where this leads.

Meanwhile, on Thursday’s new episode of B&B, Liam is going to be feeling determined. As B&B viewers know, he just had the stunning and emotional realization that Phoebe Forrester (River Davidson and Madeline Valdez) is his daughter Beth. In an instant, he realized that something horrible must have happened on Catalina Island, when he and Hope were told by Reese Buckingham (Wayne Brady) that their daughter had died.

Liam doesn’t have all the details yet, and soon his joy over holding his daughter in his arms will turn to anger, as the full realization of the deception and lies that others have been perpetrating washes over him. On Thursday’s episode, he’s going to want some answers and there will be hell to pay for one person in particular.

As B&B viewers know, Liam has also just learned that Florence “Flo” Fulton (Katrina Bowden) lied about giving birth to Phoebe. He found out that Flo did not actually give birth at the Las Vegas hospital listed in the adoption records, and so it looks like Flo is going to be the first person he goes to for answers.

On Thursday’s episode of B&B, Liam will head to Wyatt Spencer’s (Darin Brooks) place to try to track town Flo and confront her about her lies. He’ll want to get to the bottom why she lied in the first place, what actually happened on Catalina Island, and how Thomas got involved with everything.

According to B&B spoilers, Liam will indeed track down Flo, but it will be at a crucial moment. Flo has just made the decision to confess everything to Wyatt. She’s pretty sure that he may leave her in the end, but she’ll think that perhaps he will help her find a way to break the news to Hope and Liam that Beth is alive. It appears that she’ll be on the verge of telling Wyatt everything, when Liam bursts in.

Wyatt will be stunned as an angry Liam will confront Flo and reveal that the secrets and lies are over, and that he knows that truth, but she’s got to cough up the details. It should be a suspenseful moment as Flo realizes that she’s been caught just at the moment she was going to come clean.