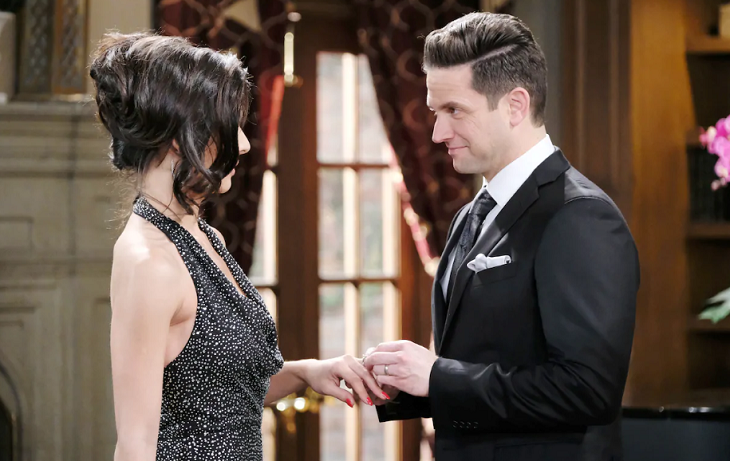 Ted wants to know where Chloe got the necklace; she won’t tell him. Ted keeps pushing Chloe and tells her the necklace could be evidence in a criminal case. Ted threatens to involve Kate Roberts (Lauren Koslow) before giving him the necklace.

Days of Our Lives Will Horton (Chandler Massey) meets with Hope Brady (Kristian Alfonso) about an article for the Spectator. Will wants to talk to Hope about rescuing Ted and Kate. Will tells Hope that Ted is lying to her. He gets a phone call and explains that he thinks he planted some doubt in Hope’s mind about Ted. Ted tells Hope that Will is trying to stick it to him. He pulls the necklace out and tells Hope he wants her to have it. Hope agrees to take the necklace and allows Ted to put it on her as Hope hears Will’s warning in her head.

Days of Our Lives Abe Carver (James Reynolds) arrives to perform Gabi Hernandez (Camila Banus) and Stefan DiMera’s (Brandon Barash) wedding. Abe also tells them Nicole may be getting married later as well. Ben Weston (Robert Scott Wilson) suggests that Nicole is up to the same thing they are. Gabi is furious that Nicole is going to try and marry a DiMera.

Gabi asks when Abe last talked to Theo Carver (Kyler Pettis). Abe says Nicole would not ask her to perform that ceremony. Abe says there is one more DiMera. Ben and Ciara go back to the gatehouse, and she begins to make Gabi a bouquet.  Ciara shows up with the bouquet and offers to take pictures and send to Mr. Shin (Michael Hagiwara). Gabi and Stefan are pronounced man and wife.

Days of Our Lives Nicole and Brady Black (Eric Martsolf) show up at Tony’s apartment, but he isn’t there. Nicole threatens to call the cops and asks Brady to go outside; she calls Tony’s phone instead and threatens to kill him. Tony arrives and introduces himself. He says he is the one who pulled Nicole out, Brady asks if Kristen escaped as well and if Tony had been in touch with her. Tony tells Brady he has spoken to Kristen.

Tony said Kristen turned away and walked into the flame; he doesn’t know how anyone could have survived that. Nicole tells Tony she needs his help. Nicole and Brady tell Tony how Stefan is about to lose the company. Tony wonders why Nicole wants to help him. Nicole can’t marry E.J. Dimera (James Scott) she needs Tony to marry her. She wants Tony to marry her long enough to get Nicole control of DiMera, and he can go back to Anna a rich man.

Brady starts to call Abe, but Nicole stops him. Brady goes to find someone to perform a wedding now. Nicole thanks Brady before he leaves. Kristen demands to know what Tony is trying to pull. Kristen starts to threaten Tony, and he tells her he can blow her out of the water and to watch her tongue. Tony tells Kristen it is about her and what she wants as always.

Kristen tells Tony they can help each other get what they want. Brady walks in as Tony agrees to go along with her cover story. Nicole says they are going to claim to have gotten close while in the hospital. Brady tells them a justice of the peace is on the way. Nicole and Tony are married.

Eli wants to stop talking about it, Lani wants to take Eli out to celebrate. Eli feels that Julie will be upset over his job. Lani and Eli go to Doug’s Place to speak to Julie Williams (Susan Seaforth Hayes). Chloe congratulates Eli and Lani on their engagement. Chloe Lane (Nadia Bjorlin) tells Eli he has great taste in women and jewelry and wants to take him shopping with her.