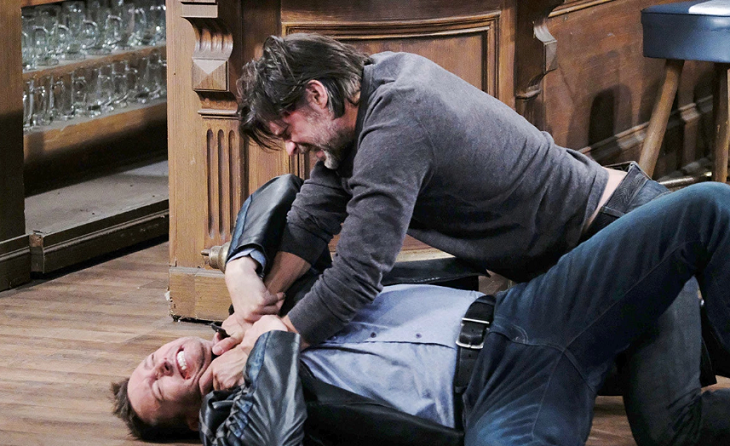 Days of Our Lives spoilers tease that Eric Brady (Greg Vaughan) will be so shocked when he finds out that fake Nicole Walker (Arianne Zucker) married Tony DiMera (Thaao Penghlis) and that Brady Black (Eric Martsolf) did nothing to prevent it, and actually witnessed it, he will physically attack Brady!

In fact, the weekly Days of Our Lives preview video shows him rushing him and pushing him through the glass doors of the Salem Inn lobby, although no glass appears to break.

Days of Our Lives spoilers tease that fake Nicole, who Days of Our Lives viewers know is really Kristen DiMera (Stacy Haiduk) disguised as Nicole Walker, will go to Chicago, Illinois, where she happens to know that Tony DiMera – or is it Andre? (Thaao Penghlis) – resides.

On a recent episode, viewers saw that apparently Kristen and Tony had been living together anyway because she has a key to the door. It’s possible the apartment belongs to Kristen however and she has been keeping him there. He sits in a wheelchair looking out a window, although in spoiler promo stills he is shown standing.

Fake Nicole goes to the apartment and tears off her mask and wig, revealing herself as Kristen to who we assume is Tony. She explains her plan to take over DiMera Enterprises from Stefan DiMera (Brandon Barash) and to get rid of him. Tony’s a little hesitant, because he is holding out for Anna DiMera (Leann Hunley) to take him back, but finally agrees.

Later, she goes back to Salem and ropes Brady into her scheme, Brady doesn’t know she’s set up a marriage with Tony ahead of time. She discussed taking over DiMera with Brady on Friday’s episode also. He advised her he knew the charter of the company said that only a DiMera could take over, and that Andre and Tony were both dead and Stefano (Joseph Mascolo) hadn’t been heard from for ages, so his status was not known. So Brady goes with fake Nicole to Chicago where they find Tony alive and Brady helps fake Nicole talk Tony into the marriage.

Then Brady joins them and when Eric finds out he witnessed their marriage he rushes and tackles Brady into a door of the Salem Inn lobby as shown in the video! Fake Nicole wanted to make sure Eric was emotionally crushed over the marriage first, and Eric is afraid for Nicole not trusting Tony DiMera probably because he might be Andre DiMera impersonating him, as he has many times in the past since even though Tony appears to be the good twin, Andre’s the evil twin!

Eric is ballistic over Brady’s failure to protect Nicole, but Brady doesn’t fight back; he lets Eric get things out of his system. They later disrupt things at the DiMera mansion, when Tony and fake Nicole burst into a meeting Stefan and Gabi Hernandez DiMera (Camila Banus) are having with DiMera board member Mr. Shin (Michael Hagiwara), who have just informed him of their marriage, and lets him know in no uncertain terms that they are not the only DiMeras in town!