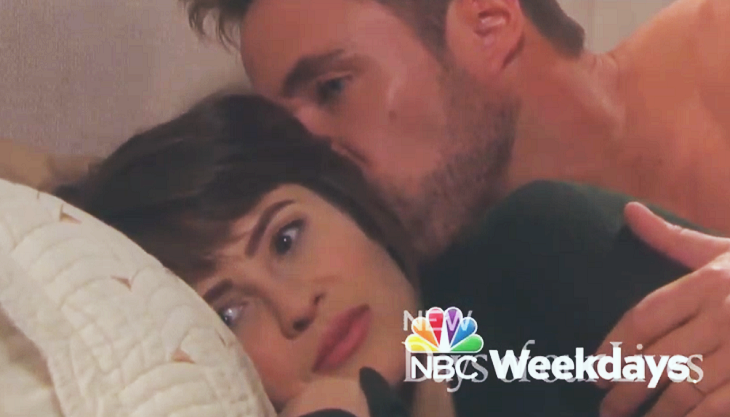 “Days of Our Lives” spoilers for Thursday, August 1, tease that “Nicole Walker’s” (Arianne Zucker) new marriage will make major waves in Salem. For starters, Eric Brady (Greg Vaughan) will be floored by this bizarre news. He’ll find out “Nicole” tied the knot with Tony DiMera (Thaao Penghlis), so he’ll demand an explanation.

Brady Black (Eric Martsolf) may be the one to provide that explanation, but that could also cause trouble. He might remind Eric that “Nicole” is capable of making her own decisions. Brady may suggest “Nicole’s” just pulling off a bold business move and trying to find a new path. If this helps her heal after the loss of Holly Jonas (Harlow and Scarlett Mallory), Brady may not see the harm.

Of course, Eric might counter that Brady’s letting his own business goals get in the way of what’s best for “Nicole.” Regardless, “Days of Our Lives” spoilers say a vicious fight will break out.

Eric will end up physically attacking Brady, so any progress they’ve made in the peace department will be obliterated. As a result, DOOL fans can expect Brady to cave in after “Nicole” makes another play for him next week.

Meanwhile, “Days” spoilers state that Ted Laurent (Gilles Marini) will be on the hot seat. Hope Brady (Kristian Alfonso) will stumble across something shocking in Ted’s apartment, so she’ll confront him and try to get some answers. It seems cold hard cash will be at the center of Hope’s mystery. She may suspect Ted was paid to say Stefan DiMera (Brandon Barash) kidnapped him.

Ted can’t exactly spill Holly’s faked death scheme, which is what actually scored him the money. “Days of Our Lives” spoilers say some tense moments are coming up thanks to Hope’s grilling session.

Over with Gabi the new Mrs. Stefan DiMera (Camila Banus), she’ll be taken aback to learn “Nicole” married Tony in the nick of time. A fierce CEO battle will get underway as Mr. Shin (Michael Hagiwara) weighs his options.

Sarah will certainly have some explaining to do, so stay tuned. We’ll give you updates as other “Days” details and rumors emerge. Stick with DOOL and don’t forget to check Hollywood Hiccups often for the latest “Days of Our Lives” spoilers, rumors, updates and news.