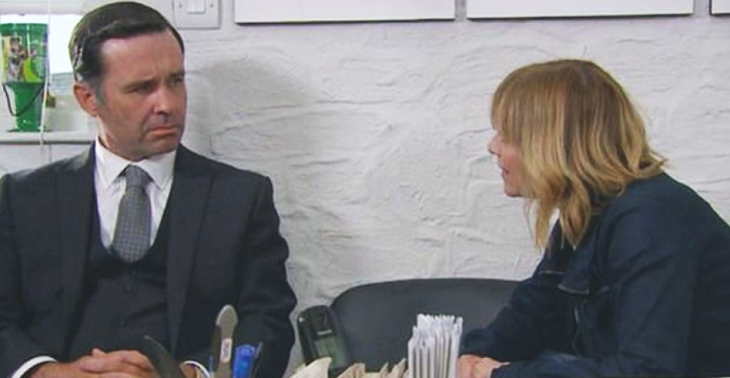 “Emmerdale” fans recently saw Rhona Goskirk (Zoe Henry) and Graham Foster (Andrew Scarborough) share a tender moment and they are convinced the pair may end up falling for each other.

Viewers may recall that Graham ended up telling Rhona all about Kim Tate’s (Clair King) evil plans after they got locked in the veterinary practice.

Prior to their heart to heart talk in the vets, Graham tried to steal ketamine. Kim ordered her to plant it in the kids playground to tarnish the reputation of the business. Rhona noticed what he was doing and made a bold move to lock them both in the vets.

She then managed to force Graham to spill the beans and eventually, both of them began sharing their secrets and other things about their past. At that moment, fans noticed their chemistry between the unlikely pair. They were delighted with what they saw and their potential as a couple.

They didn’t hold back when they took to social media to express their excitement. One fan wrote, “Not going to lie and probably an unpopular opinion but I wouldn’t object to Rhona & Graham being a couple…,” while another one said, “Why am I shipping Graham and Rhona?”

A third viewer chimed in and commented, “The chemistry between Rhona and Graham. That has leapt out without warning,” and the fourth one joked, “Graham & Rhona gonna get it on.”

Graham’s loyalty to his boss, Kim, has been divided ever since she returned to town. Kim had a revenge plan for the village and it’s slowly coming to fruition thanks to the help of his right hand man Graham.

Plus, Kim is even more furious after learning that her son Jamie Tate (Alexander Lincoln) and his wife Andrea Tate (Anna Nightingale) tried to con her of her shares in the veterinary surgery. She ordered Graham to deal with it.

NEXT WEEK’S SPOILER PICS ARE UP! Check them out: https://t.co/RBN44Y6Av7 #Emmerdale pic.twitter.com/R8JZp3uAy6

Rhona gave Graham a piece of her mind. “You don’t have to stay with her. Whatever thing it is you’ve got going on and whatever twisted loyalty you have, you’re obviously not happy. In my experience, staying with someone under obligation is never a good idea.” But Graham replied, “It’s not just something I can walk away from.”