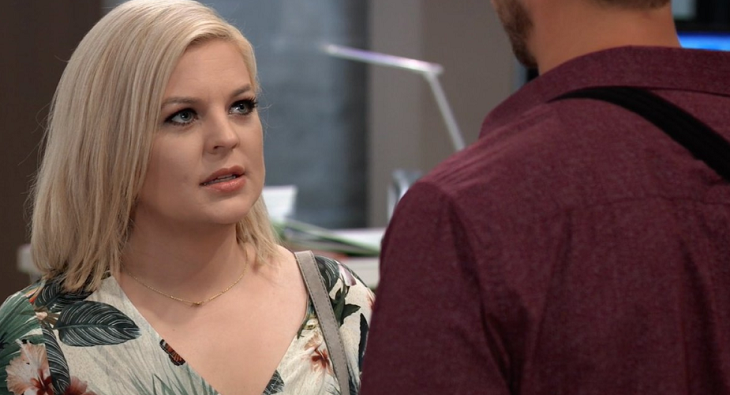 Michael is taking Sasha on a moonlight sail through the bay. Michael goes to check on the boat as Cassandra Pierce (Jessica Tuck) joins Sasha. Sasha tells Cassandra that Nina is her mother and that Nina and Valentin are getting remarried this fall. She introduces Cassandra to Michael by the fake name she is using, Michael questions if they have met before. He believes Cassandra looks familiar.

General Hospital’s Valentin Cassadine (James Patrick Stuart) is distracted by Nina Reeves (Cynthia Watros). Valentin offers to slip drugs to Jasper Jacks (Ingo Rademacher) to get him to talk about Cassandra. He has truth serum he wants to get into Jax to get answers. Nina refuses to drug Jax. Jax tells Hayden Barnes (Rebecca Budig) she needs to use someone else to make Hamilton Finn (Michael Easton) jealous.

Finn drops by to give Nina and Valentin the information that Cassandra has resurfaced. Nina and Valentin thank Finn for letting them know about Cassandra. Jax and Hayden arrive as Finn is leaving and Valentin fixes everyone drinks. Valentin tells them not to start without them, but everyone grabs drinks anyway. Valentin has no idea who got the drink with the truth serum. Finn returns because of the storm. Hayden excuses herself to go to the restroom while looking for the office.

General Hospital’s Sonny Corinthos (Maurice Benard) meets with Neil Byrne (Joe Flanigan) to settle up. Diane Miller (Carolyn Hennesy) and Alexis Davis are watching from across the room. Diane tells Alexis that Neil is soft on her. She tells Alexis she needs a mute button. Sonny tells Neil he brought Kristina Corinthos-Davis (Lexi Ainsworth) back to them.

Sonny tells Neil he will need help one day that money can buy and to come to him when it happens. Sonny tells Neil that he knows about his daughter and knows it was hard for him to work with Kristina. Neil wants Sonny to keep this to himself. Alexis tells Diane she needs a shrink more than she needs a man right now. Sonny warns Neil against using Kristina for profit as Diane and Alexis discuss her sex life.

Neil tells Sonny that Kristina’s secrets are safe with him and excuses himself. Alexis tells Diane that she is as bad as her daughters. She tells Diane she hasn’t had sex since Finn. Alexis talks about the dream that sent her back into therapy. Alexis and Neil get trapped in the elevator together during a thunderstorm.

General Hospital’s Drew Cain (Billy Miller) speaks to Shiloh Archer (Coby Ryan McLaughlin) who is trying to escape the Metrocourt and go upstairs to meet someone. Shiloh wants to know how to fix this friendship. Drew thinks Shiloh will be too busy saving his ass in court.

Drew wants to know where Shiloh was going when they met. He tells Shiloh he has another source who was in Afghanistan. Drew mentions his friend Tex who Shiloh says is dead. Drew wants to now why Shiloh didn’t mention Tex before now; he didn’t want to upset Drew. He assures Shiloh that he has nothing else to do but find out what happened in Afghanistan. Shiloh goes upstairs and meets with Dr. Cabot (Time Winters). Shiloh wants Drew’s memories given to Jason.

General Hospital’s Maxie West (Kirsten Storms) and Peter August (Wes Ramsey) are the Gh to get his arm checked out. Peter’s doctor is running late, so he and Maxie wait together. Maxie tells Peter that the Ava Jerome (Maura West) interview was her idea. Maxie talks about how great Jax is as a mentor. Peter has to stay in a sling for another week.