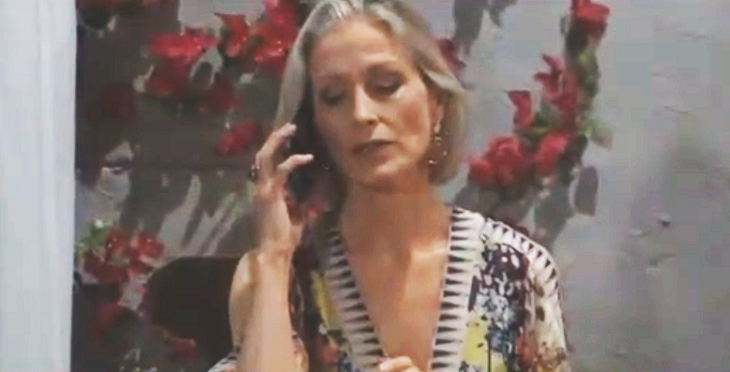 “General Hospital” spoilers for Thursday, August 1, tease that Lulu Falconeri (Emme Rylan) will get a bit riled over her current situation. She’ll be upset over losing Dante Falconeri (Dominic Zamprogn) – quite possibly for good. GH fans can expect Laura Webber (Genie Francis) to comfort Lulu as best as she can. She’ll just want to help, but Lulu will have to work through some anger over her circumstances.

Over with Alexis Davis (Nancy Lee Grahn) and Neil Byrne (Joe Flanigan), they’ll be trapped for a while in the Metro Court elevator. After Neil admits he has somewhere to be, he’ll begin opening up about his dead daughter, Joanna. “General Hospital” spoilers say Alexis will grow closer to the doc – so close in fact that they’ll nearly kiss! Of course, the elevator should start working again at the worst possible time.

Next, Nina Reeves (Cynthia Watros) will seem a little more animated than usual. Is it because she got the glass containing the truth serum or is there another explanation? “General Hospital” spoilers say Nina will catch on this Thursday. She’ll figure out something Valentin Cassadine (James Patrick Stuart) has up his sleeve, so this may be a plot of some sort.

General Hospital Spoilers: What Are Jax And Hayden Really Up To?

Hayden Barnes (Rebecca Budig) will recover after a frightening run-in at Wyndemere, but it’ll be a false alarm. She’ll smile as she reveals she got spooked. GH spoilers state that Hayden will make a complete fool of herself later, so perhaps her drink is the one spiked with a truth serum dose.

Hayden hasn’t told Hamilton Finn (Michael Easton) about his child and happens to be plotting Valentin’s takedown with Jasper “Jax” Jacks (Ingo Rademacher). There’s a lot at stake here, so she’d better hope she can zip those lips!

On Sasha Gilmore’s (Sofia Mattsson) island getaway with Michael Corinthos (Chad Duell), she’ll suggest there’s something that makes him different. Michael will look a tad thrown by Sasha’s admission. Either he’ll just have trouble accepting the compliment or he won’t view it as much of a compliment at all. Regardless, Sasha and Michael should get past this if it turns out to be some slight hiccup.

Nearby, Cassandra Pierce (Jessica Tuck) will step away to make a phone call. She’ll have some important orders to pass along, so the person on the other end will have to listen up and do what he or she’s told.