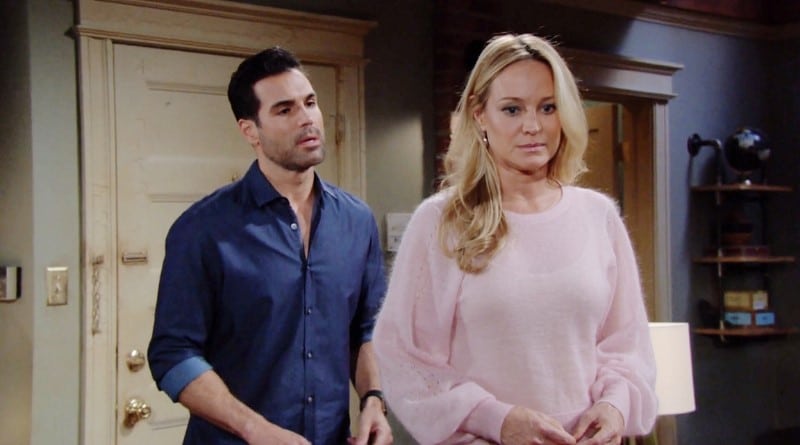 “The Young and the Restless” spoilers for Thursday, August 1, tease that Mariah Copeland (Camryn Grimes) will give Sharon Newman (Sharon Case) some advice. At the coffeehouse, Mariah notices Sharon seems upset and grills her about what happened. After Sharon admits she split from Rey Rosales (Jordi Vilasuso) because of Adam Newman (Mark Grossman), Mariah understands why Rey walked out and argues she would’ve, too.

Mariah feels Adam can fight his own battles and pushes Sharon to start making better choices. She wants her mother to choose love. At Society, Tessa Porter (Cait Fairbanks) catches up with Lola Rosales (Sasha Calle) before learning Mariah ordered Champagne put on ice. They ponder what Mariah wants to celebrate.

Over with Nick Newman (Joshua Morrow), he speaks to a designer and approves some sketches. At Devon Hamilton’s (Bryton James), Elena Dawson (Brytni Sarpy) gets a book signed by one of her favorite authors. She’s grateful to Devon, who later meets with Nick to hear his pitch. Nick wants to put his focus back on New Hope, an affordable housing project that he drifted away from after starting Dark Horse.

Devon thinks it’s a great idea and is touched that Nick wants to include Neil Winters’ (Kristoff St. John) name somehow. At Nate Hastings’ (Sean Dominic), his delightful dinner with Abby Newman (Melissa Ordway) gets derailed. Nate suggests going to the Grand Canyon together, which leaves Abby uneasy. She notes that she’s looking for fun and isn’t ready for a commitment.

Young and The Restless Spoilers Nate Hasting Shares His Troubles

After Abby takes off, Nate shows up at Devon’s place and shares his troubles. Devon has some kind words before Elena returns distraught over a lost patient. She feels she failed the victim of a construction accident. Nate provides a pep talk that helps Elena find her strength.

Back at Society, Mariah shows up and explains that Tessa’s music video has scored one million likes. Tessa’s floored and grateful for Mariah’s help in making this happen. They toast before Lola appears and gets the scoop on Rey’s split from Sharon.

Once Lola leaves, Mariah wonders what’s next. Tessa talks about some ideas she’s playing around with and hopes for more inspiration. Mariah notes that some up-and-coming stars want to collaborate with Tessa, so they continue to celebrate good news.

Meanwhile, Lola makes her way over to Sharon’s place and assumes Rey was the cause of their breakup. Sharon puts the blame on herself, but she doesn’t want Lola worrying herself over this and talking to Rey for her. She’d rather have Lola focus on her wedding instead.

Lola returns to Society and brings up Abby’s date, which brings a tense reaction. Abby and Lola discuss relationship drama before Abby ultimately texts Nate. She notes that it was a great dinner and a great night, but she’ll want to leave it at that for now.

Over with Nick, he chats with Christian by phone briefly before bumping into Sharon at the park. They bicker over Adam again before Nick warns Sharon she’ll have to pick a side. Nick thinks Sharon must choose Adam’s side or everyone else’s.

“The Young and the Restless” spoilers say another exciting episode’s on the way. We’ll give you updates as other Y&R details and rumors emerge. Stay tuned to see what’s next in Genoa City.