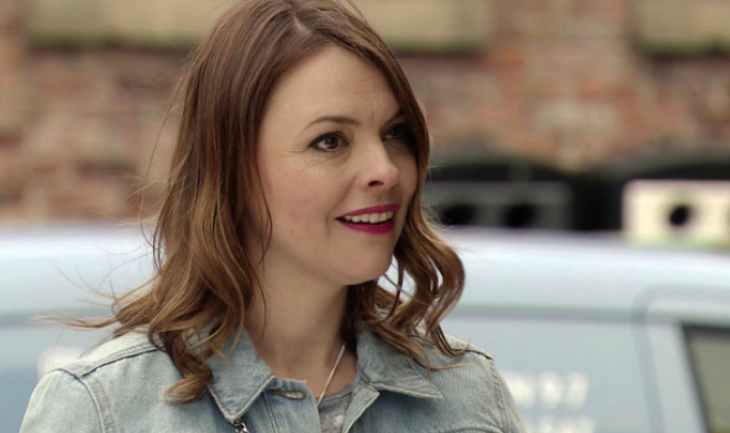 Coronation Street spoilers for Thursday, August 1 tease that Tracy Barlow (Kate Ford) will be startled to see that her ex-husband Robert Preston (Tristan Gemmill) might be leading a double life with two different women at the same time: Vicky Jefferies (Kerri Quinn) and soon-to-be wife Michelle Connor (Kym Marsh). Here’s what you need to know.

Robert will have a hard time trying to stay on both ends of the room when he realizes that Vicki decided to show up at her son Tyler Jeffries’ award ceremony, which is the same event that Robert’s fiancé Michelle is catering. Panicked that the two women might end up finding out about each other, Robert tries to get Vicky to leave the event.

Coronation Street spoilers tease that Robert will tell Vicky to stay at home, seeing that she’s already had one pregnancy scare this week and that she doesn’t need to risk another. However, the moment that he manages to usher her out of the hotel, his ex Tracy will spot him giving Vicky a big hug as the two get a little up close and personal before she goes home.

Coronation Street Spoilers – Tracy Barlow Has Been Doing Some Digging

Tracy has become increasingly curious about Robert ever since Steve McDonald (Simon Gregson) spotted him in a beer garden with Vicky several weeks earlier. Robert had begged Steve to keep it a secret between them. Steve then told Tracy that he saw Robert at the gym that same day to cover for him.

However, that hasn’t stopped Tracy from doing a little digging on her own, especially since Steve has been hiding a few secrets from her, too.

Tracy will decide to take matters into her own hands by not only investigating what her own partner is doing, but what her ex-partner might be doing to her friend Michelle, too.

Coronation Street Spoilers – Will Michelle Connor Stay Or Will She Go?

With that said, it won’t take very long for Michelle to put two and two together to realize that Robert is in fact a cheating dog.

That will also be the reason why they temporarily split up, especially when she finds out that Vicky has been pregnant with Robert’s child this entire time. Michelle is going to be so devastated that she will decide to leave Weatherfield. But this time around it will be for good.

“This fling takes place while Michelle and Robert temporarily split up, then when they’re reunited they decide to have a secret wedding, by inviting guests on the premise it’s for his 50th birthday,” a Coronation Street insider teased The Sun