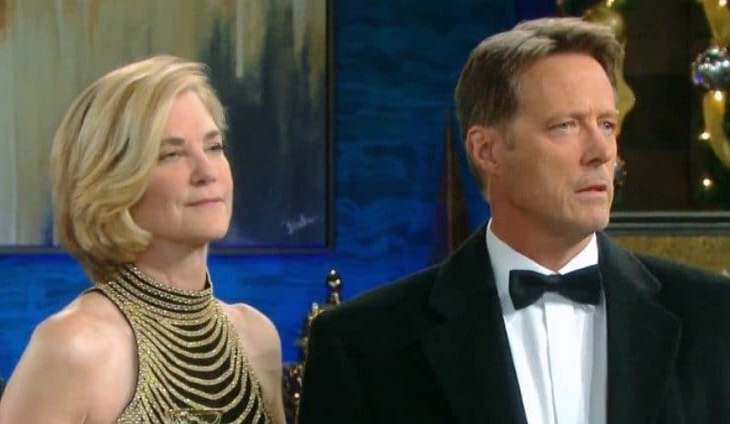 Days of Our Lives spoilers tease that Eve Deveraux (Kassie DePaiva) could be on her way out of Salem once the divorce from Jack Deveraux (Matthew Ashford) becomes final.

On July 26, Jason 47 reported on his Facebook page that there is a photo missing from the photo chart where Days of Our Lives powers-that-be display the photos of current cast members. This is always displayed in the makeup room. The report, with photos of two photo charts, could be considered a type of insider leak.

Days Of Our lives Spoilers – Jack Deveraux Moves on With Jennifer Horton?

Storyline wise, since Days of Our Lives writers seem to be moving Jack towards Jennifer Horton (Melissa Reeves) it makes more sense to write Eve out than it does Jack. Of course, with a character like Eve Deveraux, they could write plenty more trouble for her to get into and cause. There is also likely to be aftermath involved with the divorce between the two.

Days of Our Lives fans also need to keep in mind that when an actor leaves, it doesn’t necessarily mean they have been fired or are ill. This is important to note especially in Kassie DePaiva’s case, since she is a cancer survivor. She has indicated nothing about any recent illness in her social media accounts, and she cares about her fans, so if something was up, she’d let them know. Sometimes the actor is written out for storyline purposes and may be asked to return later. This has happened many times to actors on Days of Our Lives, as well as other soap operas, over the years.

An anonymous “casting note”, or “drop” in the “Insider’s Lounge” of The Daytime Dish website indicates that some former “One Life To Live” actors, both male and female, were going to start working on General Hospital was left on July 14th. One, Mark Lawson, made his first appearance on General Hospital July 9 and has made one appearance since and will make more as Dustin Phillips.

The last time Ashford appeared on One Life To Live was as a serial killer, Dr. Steven Haver. He also played Dr. Tom Hardy on General Hospital. So unless both Jack and Eve are leaving, to play a new character couple on General Hospital, it makes more sense for it to be Eve, since the storyline direction seems to be putting Jack back with Jennifer.

Days Of Our lives Spoilers – Actors Move Between The Soaps Regularly

Historically, Days of Our Lives and General Hospital have had many actors going back and forth between the two shows. Wally Kurth plays both Justin Kiriakis on DOOL and Ned Quartermaine on GH. Thaao Penghlis has played Andre and Tony DiMera on DOOL and Victor Cassadine on GH. Genie Francis played the original Diana Colville on DOOL and Laura Spencer on GH.

Stephen Nichols and Mary Beth Evans play Patch and Kayla Johnson on DOOL and played Stefan Cassadine and Katherine Bell on GH back in the mid-1980s. Kirsten Storms went from playing a teenage Belle Black on DOOL to a young woman as Maxie Jones on GH. And of course Tyler Christopher, Nikolas Cassadine on GH, went to DOOL to play Stefan DiMera, and Brandon Barash, his replacement, played Johnny Zacchara on GH! The two shows certainly seem to support back and forth swaps of actors!

Fans will probably not know for at least another two to six months whether either DePaiva or Ashford will travel from Salem to Port Charles, because of the filming schedules of the two shows, although it seems more likely to be DePaiva, if anyone. Stay tuned to Days of Our Lives and keep checking Days of Our Lives spoilers frequently for all the latest news, updates and developments!