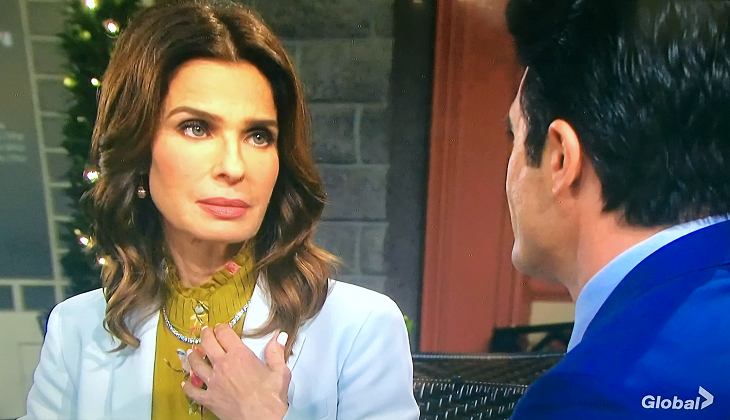 “Days of Our Lives” spoilers for Friday, August 2, tease that Rex Brady (Kyle Lowder) will push Sarah Brady (Linsey Godfrey) to be honest about her true feelings for Eric Brady (Greg Vaughan).

Instead of using Rex’s name in their cozy moment, Sarah accidentally told “Eric” she loves him instead. Rex will suspect this is more than just a simple slipup – and he’s exactly right.

DOOL fans can expect some tense scenes as Rex reels over Sarah’s full confession. She’ll admit her heart belongs to Eric, not Rex. Although Sarah cares about Rex and loved him once upon a time, those feelings just can’t compare to what she feels for Eric now. “Days of Our Lives” spoilers say Sarah will confess Eric’s the one she wants, so her new husband isn’t going to be happy.

Rex will complain about Sarah committing to him when she was in love with Eric instead. He’ll feel like their marriage was a mistake that could’ve been avoided, but what’s done is done. DOOL spoilers state that Rex and Sarah will just have to decide where to go from here.

Of course, there won’t be anything left to salvage thanks to Sarah’s latest admission. An annulment should be just around the corner for these two. Rex is set to leave town next week, so stay tuned to watch his ominous parting words spook Sarah.

Until then, “Days of Our Lives” spoilers say someone else will have to explain across town. Ted Laurent (Gilles Marini) was pleased when he realized Hope Brady (Kristian Alfonso) had been snooping. He asked for an explanation, but Hope may think Ted’s the one who owes her that. She stumbled across tons of cash, so this should spark an argument about Ted’s lies and all their trust issues.

Other “Days” spoilers reveal that Gabi DiMera (Camila Banus) will secure the CEO position. She’ll beat out “Nicole DiMera” (Arianne Zucker), who went to great lengths to make herself a potential candidate.

Kristen DiMera (Stacy Haiduk) will be frustrated when she realizes her hard work didn’t pay off. She’ll refuse to accept that she married Tony DiMera (Thaao Penghlis) for nothing.

While Gabi savors her victory, Kristen will hope to move past her defeat. Despite Mr. Shin’s (Michael Hagiwara) latest decision, Kristen will think there’s still hope for the future. Some sneaky tricks are coming up soon enough.