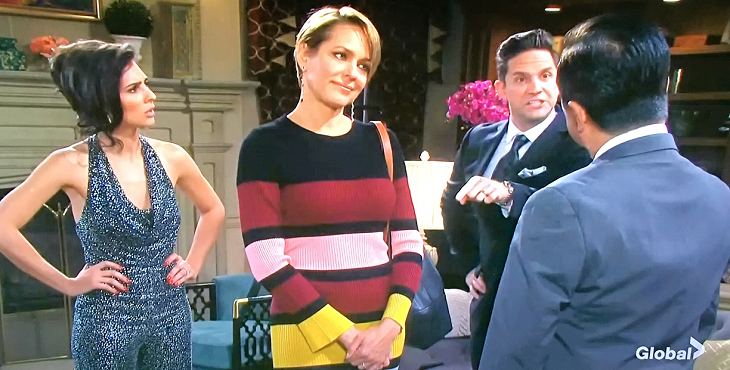 Eric is thinking about getting a dog, Sarah offers to dog sit for him. He leaves, and Rex Brady (Kyle Lowder) confronts Sarah about the encounter. Sarah is upset, and Rex apologizes. Later, when they are in bed together, Rex tells Sarah he loves her and she replies: “I love you, Eric.”

Days of Our Lives Will Horton (Chandler Massey) is still working on the piece on Stefan DiMera (Brandon Barash). Will wonders if Ted Laurant (Gilles Marini) is involved as more than just a hostage. Will thinks that Hope is investigating Ted on her own. Sonny orders food thinking he and Will have some time alone. Will and Sonny invite the three of them to join them for dinner.

Eric is glad to be invited to dinner and thanks everyone for inviting him to dinner but decides it is time to leave. Eric offers to clean up after dinner. Will and Sonny insist on helping. He starts to leave and walks into Brady on the way out. Brady wants to talk; Eric wants no part of it.

Days Of Our Lives Spoilers – Mr. Shin Is Shocked By Two Mrs. DiMeras

Days of Our Lives Gabi Dimera (Camila Banus) is with Stefan at the mansion waiting on a call from Mr. Shin (Michael Hagiwara). Stefan is sure their plan will work, but Gabi is worried about Nicole. Stefan believes his and Gabi’s connection is stronger than either of them believed. He wants to talk about their marriage, Gabi says they need to concentrate on the matter at hand. Stefan wants to undress Gabi as they wait to hear from Shin.

Gabi agrees that consummating their marriage would make it real. Stefan wants to celebrate their wedding night. Stefan pulls Gabi into a kiss before taking her hand and walking toward the stairs. The doorbell rings, Stefan starts to ignore it, but it’s Mr. Shin, who tells him the board has decided to fire him.

They are already searching for his successor, Gabi tells him to stop looking, she is Stefan’s wife. Gabi and Stefan tell Shin they got tired of sneaking around so made their relationship official. Shin has to speak with the board before he can appoint Gabi as CEO. Nicole Walker (Arianne Zucker) walks in an says she is Mrs. DiMera too.

Days of Our Lives Nicole is waiting on a call from Mr. Shin as well. Brady Black (Eric Martsolf) goes to bring the car around to get Tony DiMera (Thaao Penghlis). Nicole gets a call saying Shin is on the way to Salem; they have to head home. Tony, Nicole, and Brady arrive in Salem and Eric bumps into them in the square. Tony tells Eric he and Nicole are married. Nicole tells Eric he can be the first to congratulate them.

Eric says this makes no sense, Nicole explains how Tony saved her from the fire. She says she and Tony bonded in rehab and fell in love. Nicole says she had to find Tony when her memory returned yesterday. Eric can’t believe that Brady is encouraging this marriage. Eric asks Brady how he could do this. Brady says he knows Eric is disappointed; Eric says he is devastated. Eric attacks Brady.

Rex breaks up the fight. Sarah defends Eric to Nicole, who again blames Eric for her daughter’s death. Nicole wants Eric to leave her alone. Brady says he can explain what is going on; Eric tells him to get the hell away. Rex and Sarah try to help Eric.

Eric apologizes for Rex having to come between them. Sarah insists Eric go home with them. Brady tells Nicole to find Shin while he heads home. Tony tells Nicole she has to stop fawning over Brady. Tony wants to know why Kristen doesn’t reveal herself to Brady. Kristen will reveal herself in due time.

Days of Our Lives Ted wants to take Hope Brady (Kristian Alfonso) to dinner; she prefers going to his place. Ted needs some time to prepare before Hope comes to his place. Ted offers to make a seafood salad. Ted invites Hope to go shopping with him. Hope is impressed by Ted’s place and agrees to help him by chopping up food.

Days of Our Lives: Robert Scott Wilson Gets A New Gig @celebratesoaps https://t.co/QoSxJ3YE4X

Ted goes back to the market as Hope searches his apartment. Hope finds huge wads of money in a drawer at Ted’s place while waiting for him to return. Ted comes in and asks if Hope wants to explain.