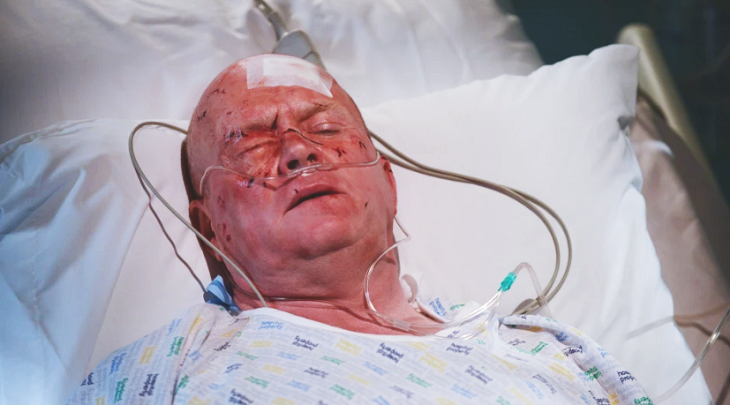 Phil Mitchell’s (Steve McFadden) life hangs in the balance after getting clubbed by Stacey Fowler (Lacey Turner) with a wrench. Stacey just wanted Phil to stop throttling Martin Fowler (James Alexandrou), after he came in between Phil and Kat Slater (Jessie Wallace), who were having a heated argument.

No one knows if Phil will survive the attack, but one thing is sure. Phil’s fighting for his life, per “EastEnders” spoilers.

It all started when Phil got into a confrontation with Kat about the stolen money. He threatened to harm Kat’s son, which infuriated her. She warns him not to threaten her boys. Martin followed the two into the garage and there he found Phil screaming abuse at Kat.

Martin tried to stop Phil and warned him to get his hands off Kat. Phil immediately turned his rage over to Martin and started to beat him. He then holds a metal bar across Martin’s throat to choke him. Kat screamed for Phil to let Martin go but he wasn’t listening.

Fortunately Stacey arrived and did something that shocked everyone. She got a spanner and smashed it onto Phil’s head. As Phil lay bleeding in the car pit of the garage, the trio panicked as they tried to figure out what to do next.

It is still unclear if Phil will survive the attack. Some viewers believe that this could be the start of Stacey’s exit storyline as her portrayer, Turner, bows out for maternity leave. Spoilers reveal that Ben Mitchell (Max Bowden) will find his father bleeding and at the brink of death at The Arches.

EastEnders Spoilers – Ben Mitchell Has Wanted Revenge On His Father

“EastEnders” viewers may recall that he was seething with rage after finding out from Sharon that Phil cut him out of his will in favour of Keanu Taylor (Danny Walters).

Ben, who’s been wanting to get revenge on Phil, since his return, could finally get what he wants if his father dies. Will he wait until Phil takes his last breath or will he have a change of heart and help his father?

“Nothing ever changes.” #EastEnders pic.twitter.com/8yCafcQTNQ

“EastEnders” spoilers also teased that Phil’s attack will rock the whole Square. As people start to point fingers, someone will get arrested while those who are involved go to dangerous lengths to cover their tracks. Will the police find out that truth? If they do, what will happen to Stacey? Will Phil survive?