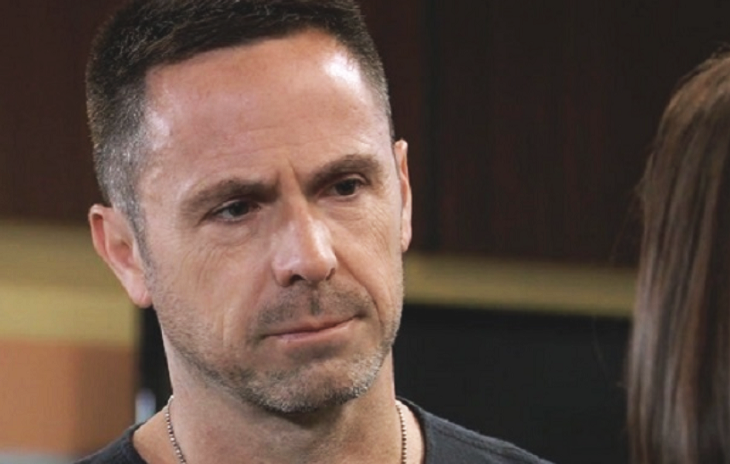 General Hospital spoilers tease that William DeVry had an amazing General Hospital milestone to celebrate It was six years ago that Julian Jerome returned to GH fans’ television screens and to Port Charles as Derek Wells, who had just purchased the struggling Crimson Magazine. We congratulate DeVry on his success as Julian Jerome, and here’s some history on Julian.

Previously, the character had been played and introduced by actor Jason Culp as the son of mobster Victor Jerome (Jack Axelrod) and an unknown woman. Julian’s surviving siblings are his full sister Olivia Jerome (Tonja Walker) and his little sister, Ava Jerome (Maura West), daughter of Victor Jerome and Delia Ryan (Ilene Kristen).

During this first incarnation of Julian, he had an affair with the sister of Tiffany Donely (Sharon Wyatt), Cheryl Stansbury (Jennifer Anglin) which produced his oldest son, Lucas Jones (Ryan Carnes). In college, he met a teenage girl, Alexis Davis (Nancy Lee Grahn) in a bar, and picked her up.

They had a backseat rumble which produced Samantha McCall (Kelly Monaco). The last Julian was seen was in a gun battle with Jonathan Paget (Ian Buchanan) in 1990. Jonathan was impersonating Duke Lavery, an old enemy of the Jerome family, and he was killed.

At the point William DeVry joined GH, Julian had been presumed dead for 23 years when he reappeared as Derek Wells, media mogul in Port Charles. He bought Crimson Magazine and the Port Charles Press. His little sister Ava had just come to town, and at the time they were still involved in mob activity, planning to take over Sonny Corinthos’ (Maurice Benard) territory.

Samantha, who at the time did not know who her birth father was, came to the Crimson office looking for Connie Falconeri (Kelly Sullivan) and found “Derek Wells” and asked him to run a story on her and Jason Morgan’s (Steve Burton) son, Danny Morgan (now Porter Fasullo). They were looking for a bone marrow donor after he was diagnosed with leukemia.

He agreed and ran the story, but incurred the wrath of Ava because something in the story exposed Silas Clay (Michael Easton) as her daughter Kiki Jerome’s (Hayley Erin) father when she was trying to prove it was Franco Baldwin (Roger Howarth). She thought (and he did as well at the time) that he was a secret Quartermaine and Jason’s brother. Ava wanted in on the ELQ fortune! Julian convinced Ava that this would actually work to their advantage and got her to cool down.

General Hospital Spoilers – Julian Jerome Finds Out He Has A Daughter

To make himself look good for the bone marrow story, he donated bone marrow and was found to be a match for little Danny – Alexis looked him up to thank him for saving her grandson’s life. She mentioned that she couldn’t find the baby’s grandfather because he was a one night stand, and something clicked in Julian’s memory, and he remembered Alexis and their backseat rumble. He realized Sam must be his daughter and Danny his grandson.

As a result of Julian and Alexis getting to know each other and bonding over their daughter and grandson, over a period of time they fell in love and married. However, not long after their marriage his evil older sister Olivia came to town and through a series of circumstances, forced him to work with her. He he had given up his mob activities to please Alexis and his son, Dr. Lucas Jone,s with whom he wanted to get to know and have a relationship.

He held a knife, the same one that Mikkos Cassadine (John Colicos) killed Alexis’ mother with up to her throat as a result of pressure by Olivia, and was shot by Olivia and presumed dead for a short time. Since that time, Alexis and Julian had divorced, but are shown to still love each other deep down and Alexis got him out of prison when his life was in danger. And Julian helped Alexis to stop drinking when she became an alcoholic.

Julian stayed out of the mob after Olivia was dealt with, and has maintained a close friendship with Alexis and a friends-with-benefits relationship with Dr. Kim Nero (Tamara Braun). He has assisted in protecting Lucas and his husband Brad Cooper’s (Parry Shen) adopted son, Wiley Cooper-Jones (Eric and Theodore Olson) from Shiloh Archer (Coby Ryan McLaughlin).

Shiloh thinks he is Wiley’s birth father and has been fighting for custody of him. He is also a legitimate businessman, being the owner and operator of Charlie’s Pub!

Again, we congratulate William DeVry on six action-packed years of bringing Julian Jerome to life for General Hospital fans, in which he went from mobster to grandpa and legitimate business owner. Stay tuned to General Hospital and keep checking General Hospital spoilers frequently for all the latest news, updates and developments!