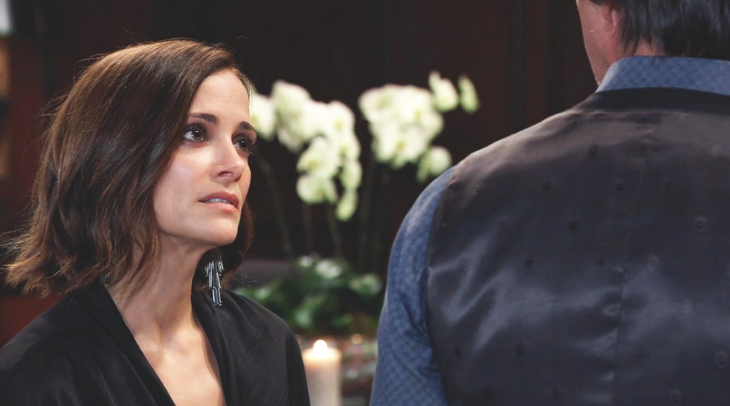 Cassandra admits to trying to make a deal with Sonny Corinthos (Maurice Benard) a couple of years ago. Sasha Gilmore (Sofia Mattsson) questions Cassandra about being in fashion, Cassandra claims to be in import and export business. Sasha hopes Nina’s dinner party didn’t get rained out. Michael and Sasha think Cassandra seems nice. Sasha asks about Michael as a kid; he explains how they came to the island as a refuge when he was a kid.

Sasha points out how much more relaxed Michael is on the island. Michael offers to let Sasha play with house money; she wants to play on her own. Cassandra invites Michael and Sasha to breakfast. Michael and Sasha go to their room but decide to skip the casino and make love. Michael tells Sasha this is the best time he has had on the island. Cassandra calls someone and says she needs to be relocated but she asks for a gift for a new friend.

General Hospital’s Valentin Cassadine (James Patrick Stuart) informs Nina Reeves (Cynthia Watros) that one of the drinks has truth serum in it. Jasper Jacks (Ingo Rademacher) tells Hamilton Finn (Michael Easton) that he and Hayden Barnes (Rebecca Budig) are not together as Hayden tries to search the house and is caught by the housekeeper. Jax is glad the Crimson issue with Ava did so well but doesn’t want to be the magazine that glorifies murderers. Nina suggests using Cassandra, Finn questions why she would want to do that.

The housekeeper escorts Hayden back to the living room. She says Hayden was trying to get into Valentin’s office. Hayden says she was snooping around and got caught. Jax tries to cover for Hayden, saying she was looking for a diamond she lost when she lived there. Nina and Jax argue over drinks, and she accuses him of trying to butter her up. Valentin offers to buy the magazine again, Jax refuses to let him.

General Hospital’s Hayden approaches Finn and tells him she can’t stop thinking about him. Hayden grabs Finn and pulls him off on her own. Hayden wants to know if Finn still thinks about her, he says it doesn’t matter. Finn tells Hayden she broke him when she left, and it took a long time to pick up the pieces. Finn tells Hayden she saved his life; he could never hate her. Finn tells Hayden that he loves Anna and has moved on from their relationship. The launch operator calls to let Finn know the launch is operating, Jax decides he and Hayden are leaving with Finn.

General Hospital’s Carly Corinthos (Laura Wright) calls the island to check on Michael and Sasha, Sonny takes the phone and tells them not to take any of Carly’s calls. Carly tells everyone they are covering the food since the electricity is out. Sonny tells Carly this is going to be expensive; she says, it’s her restaurant, her rules.

Carly calls about the generator and wants it fixed immediately. Dev Cerci (Ashton Arbab) picks the lock on the cooler and services champagne and caviar. Sonny offers Dev a job at the coffee warehouse. Carly wants to call and check on Michael; Sonny reminds her that Michael is an adult.

General Hospital’s Neil Byrne (Joe Flanigan) and Alexis Davis (Nancy Lee Grahn) are stuck in the elevator. Neil is trying to get out of the elevator, saying he has somewhere he needs to be. Alexis believes Neil is claustrophobic and offers to let him bill her for a session as they talk in the elevator. Alexis tells Neil that group therapy is helping Kristina Corinthos-Davis (Lexi Ainsworth). Alexis asks Neil where he needs to be tonight, he tells her about his daughter.

Neil apologizes, this is supposed to be Alexis’ session. Alexis says she is a good listener. Neil says his daughter committed suicide while in the cult, she was in the bathtub with an empty bottle of pills on the floor. Every day on the anniversary of his daughter’s death, Neil goes to a karaoke bar and sings. Alexis thinks that it is a beautiful tribute to his daughter. Neil sings “Hush Little Baby” every year, Alexis invites him to sing to her. Neil refuses, so Alexis sings to him. Neil joins Alexis, and they sing together before the elevator begins to move. Neil and Alexis share an awkward moment when the elevator moves.

General Hospital’s Laura Webber (Genie Frances) stops by to check on Lulu Falconeri (Emme Rylan) who is still drinking. Laura makes coffee for Lulu and wants to talk to her. Laura hates this is happening to Lulu. Lulu says she is completely alone and has to decide whether or not to let her marriage end.

Laura believes Dante Falconeri (Dominic Zamprogna) made this decision out of love, and she needs to respect that. Laura tells Lulu she’s not trying to tell her to give up on her husband, but sometimes love has a second act. Laura leaves but tells Lulu not to have any more wine. Lulu agrees and picks up her divorce papers.