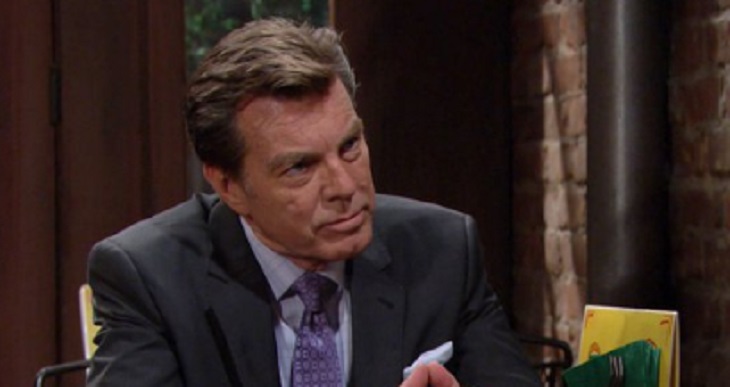 “The Young and the Restless” spoilers for Friday, August 2, tease that Billy Abbott (Jason Thompson) will get some professional help. In a therapist’s office, Billy opens up about his terrible Delia Abbott (Sophie Pollono) nightmares and describes what happened to her the night she died. He also confides about his rage toward her killer, but the therapist points out that it was just a horrible accident.

The therapist also wants Billy to consider the reason he’s holding onto Delia. She thinks Billy’s using his grief to keep Delia alive and justify how much he hates Adam Newman (Mark Grossman). The therapist points out that Billy doesn’t seem to like himself, but Billy maintains that it’s Adam he doesn’t like. Back at home, Billy notices Delia’s doll is in his bed.

At home, Summer Newman (Hunter King) gets updates on Nick Newman’s (Joshua Morrow) looming visit with Christian Newman and his New Hope project with Devon Hamilton (Bryton James). Nick also points out that Phyllis Summers (Michelle Stafford) has been working on an unusual agenda. Summer heads to Dark Horse later to confront Phyllis about what she’s been up to. She surprises her mom with a hug, and they joke about Phyllis owning her role as a drama queen.

At Newman Enterprises, Victor Newman (Eric Braeden) greets Adam and advises him on the custody case. He feels Adam and Nick must reach a compromise. Victor wants Adam to earn his place in Christian’s life, but Adam doesn’t think he should have to jump through hoops to do it. He just hopes Victor will live long enough to see his victory.

Over with Sharon Newman (Sharon Case), she chats with Victoria Newman (Amelia Heinle) about Christian at the coffeehouse. Their discussion shifts to Adam for a moment, but Victoria isn’t keen on talking about him. After Adam appears, he calls Victoria out for avoiding his attempts to see Christian. Adam rants about Victoria’s tricks with Phyllis and warns that he won’t be kept from his son.

Young and the Restless Spoilers – Adam Newman Vents To Sharon

Once Victoria leaves, Adam grumbles about the situation to Sharon. He considers telling Christian that he’s his biological father, but Sharon doesn’t think that’s a good idea. She pushes for Uncle Adam to spend time with the boy. Adam’s pleased at how Sharon can talk him off ledge. He decides to go for a walk in the park, where he encounters Nick during his visit with Christian.

Adam points out that Christian’s schedule wasn’t too busy to fit in Nick. He takes some pictures so he can show the court Victoria is giving Nick preferential treatment. Victoria leads Christian away from the conflict, so the brothers go at it.

Moves will be made, sides will be taken, and lives will be changed this week on #YR! Don’t miss it. 👏 pic.twitter.com/ynkFqORcmn

Nick feels like Adam’s a sociopath, but Adam thinks that’s too dramatic. They bicker until Nick warns that he’s going to destroy Adam. There’ll be nothing left by the time Nick’s though. He doesn’t want Christian or Connor Newman (Judah Mackey) in Adam’s life. Adam welcomes Nick’s game and remains quite confident.

At Jabot, Victor pops in to see Summer. Once she arrives, Vic lets Summer know he has a rare blood disease and is using a new treatment to fight it. Summer naturally gets emotional over Victor’s confession. Later, Victor loses his footing a bit by his car in the parking garage and almost collapses. He can’t reach Nate Hastings (Sean Dominic), so he calls Jack Abbott (Peter Bergman) out to help him.

Jack makes sure Victor gets back in the office OK and learns Vic hasn’t adjusted to the side effects he’s facing. After Jack shows support, Nate stops by to examine Victor privately. He notes that Victor’s blood pressure was low and insists Vic needs to rely on a driver from now on. Victor lets Nate know he’s still got plenty of fight left in him.

“The Young and the Restless” spoilers say some gripping scenes are coming up. We’ll keep you posted as other Y&R news and rumors emerge. Stay tuned to see what’s next in Genoa City.