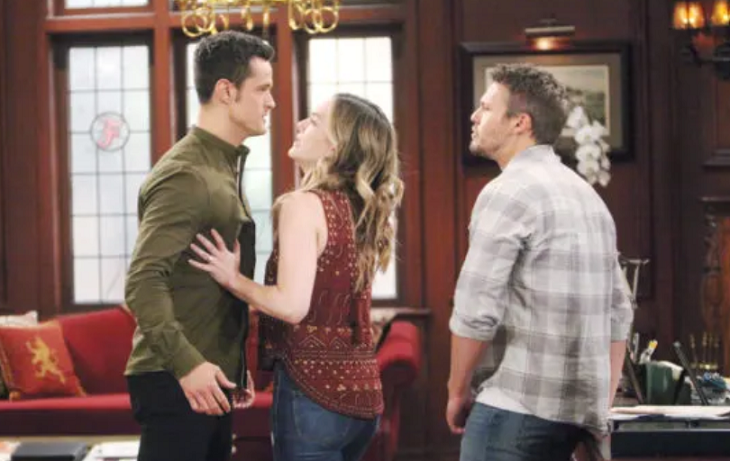 The Bold and the Beautiful spoilers for Monday, August 5, tease that Liam Spencer (Scott Clifton) will hope that what he just told Hope Forrester (Annika Noelle) will quickly sink in. As B&B viewers know, he’s just revealed to a stunned Hope that their daughter Beth Spencer is alive and is actually Phoebe Forrester (River Davidson and Madeline Valdez). They’re in the locked Forrester CEO office and Thomas Forrester (Matthew Atkinson) is on the other side of the door, frantically trying to get in.

Things are going to get chaotic from here. Hope’s clearly confused and is probably thinking Liam has just misinterpreted something that Douglas Forrester (Henry Joseph Samiri) said. She’ll want a full explanation, but since Thomas is there trying to bust down the door and get in, it will be a confusing moment for her.

Of course, Hope knows by now that there’s something really wrong with Thomas – after all, she did lock herself in the room so he couldn’t get in. But she’ll also be in utter disbelief that Beth could somehow be alive. And as she’s trying to process everything, Thomas will burst into the room, having made his way through the locked door.

According to B&B spoilers, a major altercation will take place, which will culminate in Thomas hitting Liam and taking advantage of Liam’s momentary downfall to take Hope and flee to the roof. Of course, Thomas’ plan is to get Hope on the helicopter and take her far away from Liam, but that plan’s going to go awry.

Liam will eventually recover from being punched by Thomas, and he’ll make his way up onto the roof, where a major showdown will unfold. The men will shout back and forth, and Liam will hurl accusations at Thomas, while Thomas tries to spin things and tells Hope not to listen to Liam. But in the course of all the shouting and back-and-forth, Hope will learn not only that her daughter is alive, but that Thomas knew it and kept it from her. From there, B&B spoilers indicate that Thomas will see an opportunity to flee, and he’ll take it. Will he take off in the helicopter? B&B viewers will have to tune in Monday to see!

Meanwhile, on Monday’s new episode of B&B, Wyatt Spencer (Darin Brooks) will be stunned and immensely disappointed. As B&B viewers know, he just witnessed Florence “Flo” Fulton (Katrina Bowden) admit to all of Liam’s accusations. She fully admitted that she never gave birth, lied about being Phoebe’s birth mother, and kept the truth about Beth from Hope and Liam for months.

Flo pretty much knows what’s in store from here. She’ll know that she is almost certainly going to get dumped by Wyatt, now that he’s heard all the details about what she did. But according to B&B spoilers, she’ll still put forth a valiant effort to save her relationship with him.

Flo may try to explain how she wanted to come forward with the truth, but that Thomas threatened her life if she did. But unfortunately for Flo, she was involved in the lies and deception long before Thomas got involved, and that will surely come out as she’s begging Wyatt for another chance.

B&B spoilers say that Wyatt will indeed end his relationship with Flo, as he just won’t be able to tolerate what she did. As B&B viewers know, Wyatt is big on honesty in relationships, and he won’t want to move forward with Flo after she hurt the people he loves so deeply.