Days Of Our Lives Rumor: Tragedy Strikes When Ted Confronts Kristen And Tony 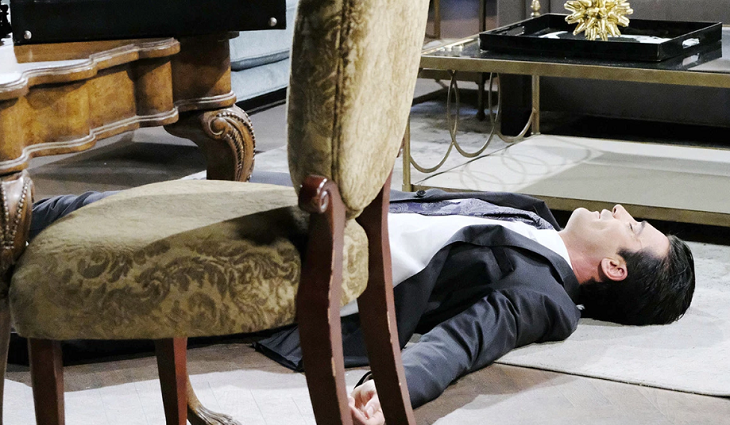 Days of Our Lives spoilers tease that tragedy will strike when Ted Laurent (Gilles Marini) confronts Kristen DiMera (Stacy Haiduk) and Tony DiMera  (Thaao Penghlis) – or is it Andre?

Ted knows too many secrets including the fact that Holly Jonas (Scarlett and Harlow Mallory) isn’t really dead. That would make him a liability, as far as Kristen is concerned. It sounds like Ted may be getting ready to expose fake Nicole Walker (Arianne Zucker) to the world as Kristen DiMera.

And apparently her “husband” and half-brother by adoption is with her during the confrontation. Kristen would have no compunction whatsoever with ending Ted forever during this confrontation. She may make good on her previous threats to kill him. However, if this is the real Tony and not Andre impersonating him, he would likely not go along with Ted being killed right in front of him, no matter how many secrets of Kristen’s he might divulge. Andre would have no problem with it, however.

Days Of Our Lives Spoilers – Is It Tony DiMera Or Is It Andre DiMera?

Longtime Days Of Our Lives viewers will recall that of the two, Tony was the better twin, if not good twin, compared to Andre, who was much more the image of an evil DiMera and who impersonated Tony before. However, Days of Our Lives spoilers do say that Tony will hesitate a bit before marrying fake Nicole, because he’s holding out hope for Anna DiMera (Leann Hunley) to come back to him. So maybe it’s Tony after all.

Andre impersonated Tony for over 20 years, however, and had tried to take over DiMera Enterprises before. And according to historical Days of Our Lives biographies of the character, Tony and Kristen had never met although Andre and Kristin had. However, Kristen has a key to the Chicago apartment where he was living. Also, Tony was the original owner and founder of DiMera. Maybe he is convinced to marry Kristen by her promises of his regaining the company as her “husband”!

Days of Our Lives viewers can see that Kristen’s a loose cannon, and a psycho on top of it! She is so obsessed with power and lust that she will do anything to become “the New Phoenix” and carry on Stefano DiMera’s (Joseph Mascolo) legacy. If Ted reveals her true identity to anyone in Salem, it could get back to Brady Black (Eric Martsolf) and ruin everything for her.

She not only wants to take over DiMera Enterprises, she wants Brady and she wants Brady to want her, but she is so obsessed she can’t see he would never want her as Kristen, even though he came out and told her in a conversation in a recent episode, when she was impersonating Nicole.

So will Kristen kill Ted and end him for good, or will Tony stop her, or will the tragedy be something else, and Kristen or Tony be killed? If Andre is impersonating Tony again no one would consider his death a tragedy nor would anyone consider Kristen’s death a tragedy.

Days of Our Lives Spoilers: Matthew Ashford On Jack & Eve Breakup – Will Mayor Get the Last Laugh? https://t.co/pVVgoT431t pic.twitter.com/cV6tZDQ0eH

They’d better think twice before trying to kill Ted with the chance that he kills one of them first though, since Eve Deveraux (Kassie DePaiva) burned up Dr. Wilhelm Rolf’s (William Utay) diary and there’s no more resurrection serum – unless there’s another copy somewhere!