Days of Our Lives Spoilers: Kristen Toys With Idea of Revealing Her True Identity to Brady 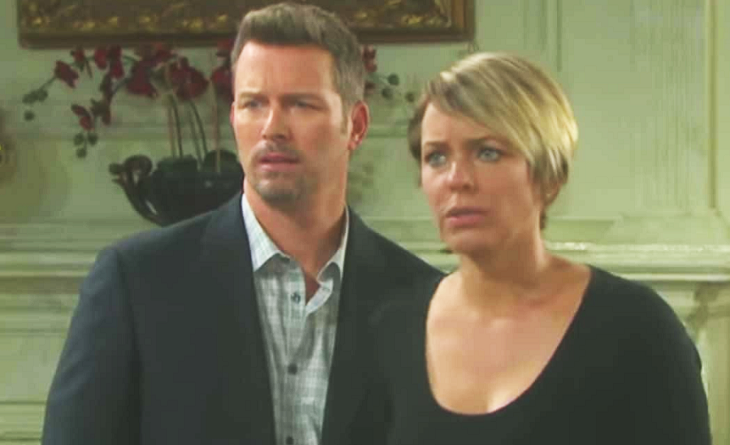 Days of Our Lives (DOOL) spoilers for the week of August 5 reveal Kristen DiMera (Stacy Haiduk) has an inner debate. Should she reveal her true identity to Brady Black (Eric Martsolf)? Fans certainly think so, but chances are high that she will play games just a little while longer. Keep reading to find out everything known so far.

Ever since Kristen returned to Salem, she has been masquerading as Nicole Walker (Arianne Zucker). Her behavior has been “off,” but her loved ones think it’s due to grief over losing her child, Holly.

What they don’t know is that the mad scientist, Dr. Rolf (William Utay) created a sophisticated mask for Kristen. Nobody knows the difference.

Even though Kristen is known for staying in control (except when in a rage,) she can’t stop her feelings for Brady. While disguised as Nicole and Susan, she couldn’t stop drooling over her ex. While Nicole’s behavior makes a little bit of sense because they used to be involved, it was bizarre for Susan.

It seems that she will continue seducing Brady. As previously reported, Days of Our Lives spoilers confirm that she will succeed. Eventually, Brady won’t be able to resist the fake Nicole’s advances.

During the week of August 5, DOOL spoilers tease that Kristen will wonder what her next move should be. She thinks about revealing her true identity to Brady. As Susan Banks once said, the “mean, mean, mean Kristen DiMera” should be exposed. However, in her heart, Kristen knows that she can’t let him know until she is ready to reveal herself to Salem.

There is always the risk that Brady will reject her again. It was Nicole he thought he was intimate with, not Kristen. In her mind, they have to be completely in love so her lies and deceit wouldn’t matter. One night in bed won’t cut it.

Fans know Brady Black. He would never be okay with forgiving Kristen for this. He doesn’t like being played with, and Kristen is just fooling herself. But that won’t stop her from trying.

Days of Our Lives #DOOL Spoilers: Gabi Faces The Truth About Her Feelings For Stefan https://t.co/YkbezzdnBZ

She will have to do a lot more to force him to stay with her – and knowing Kristen, it might involve some dark deception and perhaps some tools she learned from Dr. Rolf.