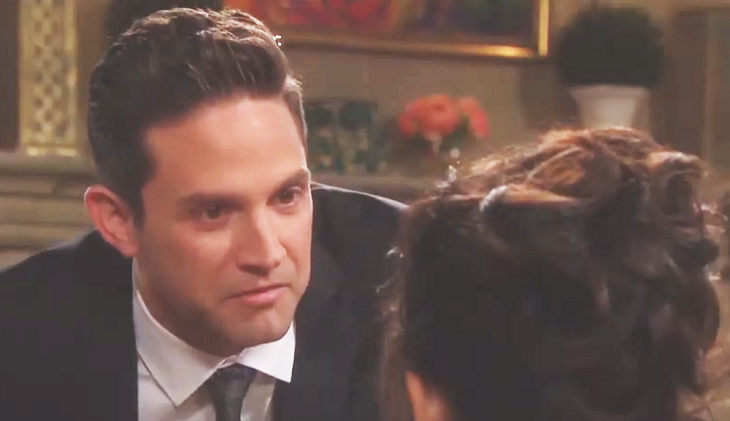 “Days of Our Lives” spoilers for Monday, August 5, tease that Gabi DiMera (Camila Banus) will savor her victory, which is obviously a major defeat for Stefan DiMera (Brandon Barash).

Stefan was ready to head up to the bedroom and celebrate, but Gabi argued he should pack his bags instead. She just kicked Stefan out of her house, so he’ll reel over his new bride’s shocking scheme.

Once Stefan wraps his head around what Gabi’s done, he’ll lash out at her for fooling him. Stefan had genuine feelings for her, so he’ll be crushed to learn Gabi’s feelings were a lie. Of course, Gabi will just be trying to sell this story to Stefan. DOOL fans know Gabi has indeed fallen for Stefan – just not hard enough to completely abandon her destruction plot yet.

“Days” spoilers say Gabi will fib about how she feels and insist she’s though with Stefan. She’ll let him know she used him to get what she wants: power and revenge.

Stefan will have to deal with all his anger and pain on his own since Gabi’s focused on her latest win. However, Gabi will change her tune later this week. Her guilt and lingering feelings will leave her uncertain about her next move.

Elsewhere, Ted Laurent (Gilles Marini) will spark a confrontation. He’ll lash out at “Nicole DiMera” (Arianne Zucker) and Tony DiMera (Thaao Penghlis) over all the drama they’ve caused, but Kristen DiMera (Stacy Haiduk) will unmask herself and fight back. Ted and Kristen will have a vicious argument that ultimately takes a lethal turn.

Once Ted takes a bullet from Tony’s gun, he’ll wind up dead on the floor. “Days of Our Lives” spoilers say Kristen will realize she’s got a big mess to clean up. While Kristen figures out what to do, Rex Brady (Kyle Lowder) will blast Eric Brady (Greg Vaughan) over his love for Sarah Horton (Linsey Godfrey). He’ll be furious that Eric let him marry Sarah without making a peep about how he truly felt.

Days of Our Lives Spoilers: Stefan DiMera Arrested For Murder – Who Does He Allegedly Kill? https://t.co/ybb24SZiK3 pic.twitter.com/NQaylvGYqt

Eric may argue that it was complicated and point out that he intended to respect boundaries. Even so, Rex will view this as a terrible betrayal. “Days of Our Lives” spoilers say Rex will battle a broken heart and try to figure out where he goes from here. It turns out it’ll be straight out of town since Rex will leave Salem in just a few episodes.

It sounds like some gripping scenes are on the way. We’ll give you updates as other “Days” news and rumors emerge. Stick with DOOL and don’t forget to check Soap Opera Spy often for the latest “Days of Our Lives” spoilers, rumors, updates and news.