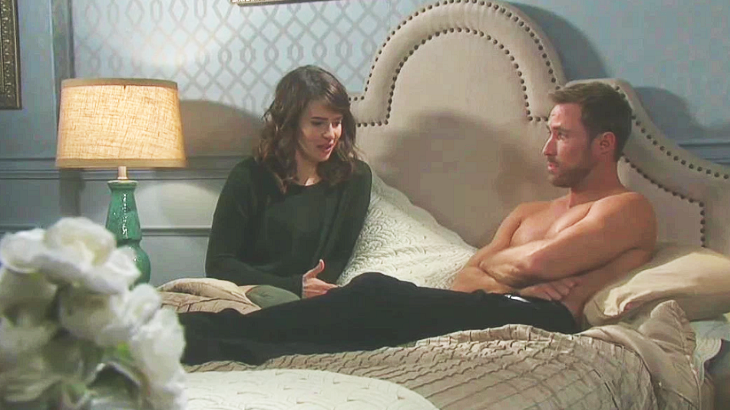 Days of Our Lives Rex Brady (Kyle Lowder) demands Sarah Brady (Linsey Godfrey) tell him the truth about her feeling for Eric Brady (Greg Vaughan). Sarah tells Rex she and Eric had deeper feelings for each other than either would admit. Rex wants to know why Sarah married him. Sarah tells Rex that she and Eric wanted to tell him the truth, but Nicole Walker (Arianne Zucker) was there. Rex asks Sarah if she loves him, she says yes. Sarah says she looked at Rex and saw the life they could have together.

Days of Our Lives Eric goes by the pub to speak to Roman Brady (Josh Taylor). Eric tells Roman that Nicole Walker (Arianne Zucker) married Tony Dimera (Thaao Penghlis). Roman thinks Tony may have an agenda of his own. Eric is furious that Brady let this marriage take place. Eric wonders what is wrong with him since both his women are with other people. He tells Roman that Sarah is committed to her marriage and to Rex.

Rex accuses Sarah of marrying him because she couldn’t have Eric. Rex asks Sarah if she loves Eric. Sarah admits to being in love with Eric. She tries to stop Rex from leaving, but it doesn’t work. Sarah comes downstairs searching for Rex and finds out he has left the mansion while Eric comes home to find Rex sitting on his couch. Rex thanks Eric for ruining his marriage.

Days of Our Lives Gabi Dimera (Camila Banus) and Nicole fight over who should be CEO of DiMera Enterprises. Gabi and Stefan DiMera (Brandon Barash) support each other in this bid for the company, Nicole tries to discredit them. Nicole says Stefan will be running things if Gabi is CEO. Gabi says she can strip her new husband of all his power.

Stefan and Gabi talk about her idea; she tries to convince him it is the only way to get what they want. Stefan agrees to Gabi’s plan, and Mr. Shin (Michael Hagiwara) says Gabi will be CEO as soon as the paperwork is done. Stefan toasts his wife and tells her they won. Kristen plans to kill Gabi to get the company away from her. Stefan wants to take the celebration upstairs, Gabi tells him to get out instead.

Days of Our Lives Hope wants to know why Ted Laurant (Gilles Marini) has all the money at his house. Ted tells Hope he quit his D.A. job for her. Ted finds the basil in the garbage and accuses Hope of coming to his place to go through his things. Ted tells Hope that she doesn’t trust him.

Hope tells Ted some details don’t add up. Ted wonders why Hope is listening to Will Horton (Chandler Massey) when he hates him. Ted accuse Hope of lying to him. Ted tells Hope she is afraid to feel again. Ted tells Hope he loves her, Hope begs him for the truth about everything. Ted refuses to tell Hope the truth, and Hope claims it is because he loves her.

Days of Our Lives Kate DiMera (Lauren Koslow) wants Xander Cook (Paul Telfer) to help find Kristen DiMera (Stacy Haiduk). Kate tells Xander that Kristen is threatening her children as well. Xander tells Kate that she supported Kristen and was far as Kristen is concerned, Kate is on her side. Kate gets frustrated and leaves telling Xander she will stay away from all of them. Ted calls Kate and wants her help with Hope.

Read more news, spoilers, and gossip on our Days of Our Lives homepage.