General Hospital Rumor: Does Cassandra Have A Connection To The Conundrum Box? 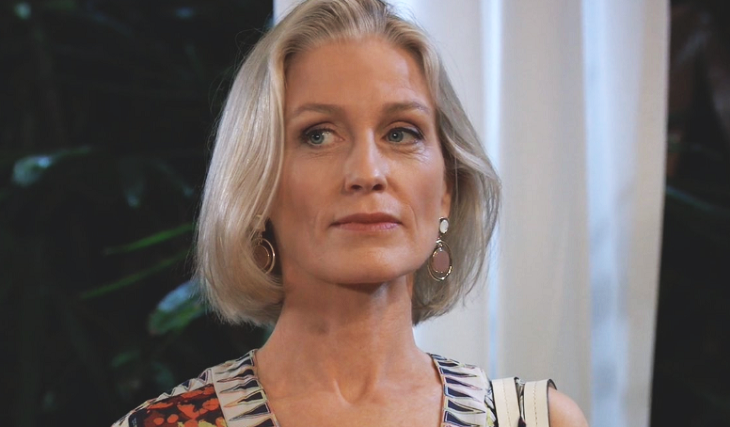 General Hospital spoilers tease that Cassandra Pierce (Jessica Tuck), the Cassadines, in particular one with the initials “NC”, the conundrum box found in Cesar Faison’s (Anders Hove) belongings, and Jason Morgan (Steve Burton) and Sam McCall (Kelly Monaco) in Switzerland a couple of years ago, could all be connected!

General Hospital viewers will recall that the conundrum box bore a Cassadine crest, and Robert Scorpio (Tristan Rogers), upon inspecting it, said it was a conundrum box. This meant there was a combination that only one person would know to open it, and trying to open it in any other manner could cause it to explode! It’s possible it wasn’t Valentin or Mikkos Cassadine (James Patrick Stuart, John Colicos) who actually owned the box, but Nikolas Cassadine (Tyler Christopher).

On Wednesday’s General Hospital episode, Hayden Barnes (Rebecca Budig) and Jasper Jacks (Ingo Rademacher) went to Wyndemere for a dinner party that Nina Reeves (Cynthia Watros) had invited them to. But they had an ulterior motive; to look for something. Hayden, who had once been married to Nikolas and had lived in Wyndemere when he “died”, told Jax it would probably be in the office and that Valentin probably knew nothing about it.

Nikolas left, after changing his name to Niles Carradine, in July of 2016. Hayden left in September 2017, on the run from her ex-husband Jared Preston, Jr. (Matt Corboy) who had done time in her place for a hit and run homicide of a child. Hayden probably knew nothing about Nikolas having a conundrum box at that time, but guessed it would be something Nik kept in his office in Wyndemere. She may be aware of a secret safe that Valentin may not be – or so she thinks. This could be what she was looking for.

Before this week, the last Cassandra had been seen was after Dr. Hamilton Finn (Michael Easton) brought her out of a coma in a Canadian clinic, having been lured there by the kidnapping of his now fiancé Anna Devane (Finola Hughes). This was in August 2018. Finn came to Wyndemere on Wednesday to warn Valentin and Nina that Anna told him on the phone that Cassandra had resurfaced. He had been seen on some surveillance video with a man in Northern Italy.

Other General Hospital spoilers tease that the man might be Nikolas. Now Cassandra has shown up in Puerto Rico, where she interrupted Michael Corinthos (Chad Duell) and Sasha Gilmore’s (Sofia Mattsson) vacation, claiming to be “Sandy Lance”. She then called a mysterious person and told them not to talk, just to listen/ Perhaps she was concerned the call could be intercepted and listened to, perhaps by the WSB?

As General Hospital viewers know, Jax has a file on Cassandra and Hayden was married to Nikolas and knows the layout of Wyndemere, where Valentin and Nina live now, along with Charlotte Cassadine (Scarlett Fernandez). Liesel Obrecht (Kathleen Gati) is also there, at least for the time being.

Everything seems to be connected in that Jax needed Hayden to find something in Wyndemere, and he has a file on Valentin, who was once a lover and former associate of hers in his mercenary days. That and the mysterious Cassadine hand was seen on her knee after being intercepted last August on her way back to the WSB.

It seems like Cassandra, the Cassadines – the presumed dead Nikolas and the definitely alive Valentin – and the conundrum box may all be connected! Who knows what secrets that conundrum box might hold that Jax and Hayden are possibly trying to retrieve? Another question is how did Faison get it?