General Hospital Rumor: Will Jealous Nelle Put A Target On Sasha’s Back? 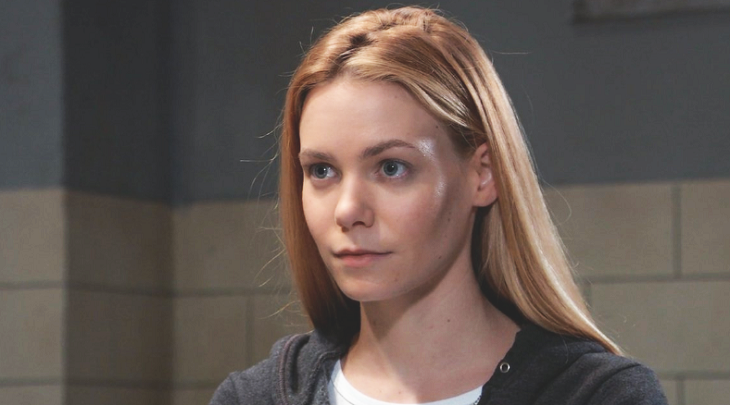 General Hospital spoilers tease that a jealous Nelle Benson (Chloe Lanier) may put a target on Sasha Gilmore’s (Sofia Mattsson) back. She didn’t like what she saw as Michael Corinthos (Chad Duell) showed her a photo he received on his cell phone of Sasha holding Wiley Cooper-Jones (Eric and Theodore Olson) on a recent episode.

Other General hospital spoilers and rumors tease that Nelle might escape Pentonville Correctional facility, possibly with her new friend Ryan Chamberlain (Jon Lindstrom). They both have scores to settle in Port Charles, his over his “stolen” kidney that saved Jordan Ashford’s (Briana Nicole Henry) life.

And even Nelle doesn’t want David Henry “Shiloh” Archer (Coby Ryan McLaughlin) to get her baby. She doesn’t want Michael and especially not Carly Corinthos (Laura Wright) to have access to Jonah, but she sure doesn’t want Shiloh to be around him after what her cellmate Harmony Miller (Inga Cadranel) told her.

In spite of Nelle seeking revenge and having tried to murder Michael by setting up the car accident that backfired on her, it was very clear to General Hospital viewers she is still jealous over him when she saw Sasha on his phone with her baby. Nelle asked way too many questions about if Sasha was his girlfriend for her not to be jealous!

There isn’t a lot she can do about it while she’s still confined in prison, but once she figures out how to escape, possibly with Ryan’s help, she can probably convince Ryan to actually kill of Sasha. She might figure an escape plan herself, since she has more freedom than Ryan does, and could possibly get them both out. Maybe she’ll even bargain with him that she’ll get him out if he promises to kill Michael’s girlfriend.

Nelle doesn’t want anyone to have Michael if she can’t, hence her wanting Sasha gone, but she doesn’t want anyone except her friend Brad Cooper (Parry Shen) and his husband Lucas Jones (Ryan Carnes ) to have Jonah. Right now, she’s not real worried about Willow Tait (Katelyn MacMullen), but she is worried about Shiloh. Once they are out of Pentonville, Ryan could easily take down Shiloh as well as Sasha, even one handed!

General Hospital Spoilers – No Issues Killing Despite Only Having One Hand

After all, as General Hospital viewers recall, he had no problems killing the woman who helped him in Canada as well as tying Laura Webber Collins (Genie Francis) and Curtis Ashford (Donnell Turner) together and their chairs together, not to mention setting up the gas furnace in the house to explode with only one hand. Ryan is nothing if not nimble-fingered!

There is a good question as to where Nelle and Ryan might be able to hide out if they escape and come to Port Charles. Ryan can’t really capture Kevin and switch again because Kevin still has both his hands. And Nelle doesn’t really have anywhere to hide without someone’s help either.

It’s possible that they could break into a vacant house somewhere and stay there, at least temporarily. That would have to definitely be planned out before they try to make a run for it. Stay tuned to General Hospital and keep checking General Hospital spoilers frequently for all the latest news, updates and developments!