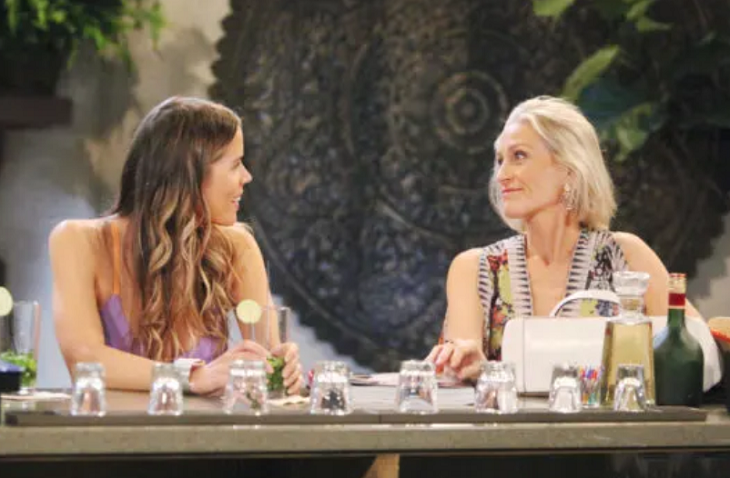 General Hospital’s Michael Corinthos (Chad Duell) and Sasha Gilmore (Sofia Mattsson) wake up in bed together. Michael tells Sasha the more he gets to know her the more he likes her. While Cassandra Pierce (Jessica Tuck) calls and asks when she should be at the airstrip, Cassandra says she has breakfast with some very important guests and will be there. Cassandra injects something into the grapefruit at breakfast and wants a selfie with her two new friends. She says she is leaving today; she has to get back to making a killing.

General Hospital’s Hayden Barnes (Rebecca Budig) runs into Hamilton Finn (Michael Easton) and tries to get away before he sees her. Finn thinks Hayden is embarrassed about the conversation the night before. Hayden claims she doesn’t know what was said last night. Finn doesn’t remember either. Hayden asks who Cassandra is and Finn explains she is the leader of a drug cartel. They agree that they would have never worked out as a couple. Hayden hopes never to see Finn again, he agrees. Finn runs into Dr. Cabot (Time Winters) and demands to know why he isn’t in custody. Cabot is picking up a prescription.

General Hospital’s Sam McCall (Kelly Monaco) and Willow Tait (Katelyn MacMullen) meet to discuss Shiloh Archer (Coby Ryan McLaughlin). Sam needs to know more about Shiloh’s time in Afghanistan and asks Willow if he ever mentioned it. Willow tells Sam that Shiloh would do anything for a payoff and was waiting on money before he got hurt. Shiloh approaches Willow and Sam and says this made his day. Willow cannot believe Shiloh made bail.

Shiloh is going to see his lawyer to go over this fabricated evidence. Sam excuses herself after mentioning her plastic surgeon. Harrison Chase (Josh Swickard) serves Shiloh with restraining orders from Willow and Brad Cooper (Parry Shen), Lucas Jones (Ryan Carnes), and the baby. Sam calls Jason and tells him she is going to search Shiloh’s room. Jason later gets a call from Shiloh telling him if he wants to see Sam alive again he will do what he asks.

General Hospital Rumor: Does Cassandra Have A Connection To The Conundrum Box?

Chase shows up in Drew Cain’s (Billy Miller) office to investigate the robbery. He says that Shiloh has an alibi for the time the flash drive was stolen but suggested a DOD member because he tends to have followers take the blame for him. Chase plans to get a warrant to search Shiloh’s room. Drew and Curtis discussed Drew’s call to intelligence, and he gets an email says he wanted to report a contractor. Curtis tells Drew he bet the contractor was Shiloh. Curtis wonders why Shiloh wants the flash drive; Drew is sure there is something on it that Shiloh needs.

General Hospital’s Cabot shows up at Shiloh’s room. Shiloh tells Dr. Cabot that his cash reserves are in Afghanistan and the location is in Drew’s memory. Cabot asks if Shiloh is still trying to transfer the memories to Drew’s twin. He says that one twin may be deemed ineffective. Shiloh wants to know when Cabot can be ready. Cabot tells Shiloh that he wants the flash drive.

General Hospital’s Jason Morgan (Steve Burton) is with Liz Baldwin (Rebecca Herbst) and Jake Webber (Hudson West) at Kelly’s. Liz thought Jason and Franco Baldwin (Roger Howarth) made some sort of peace. Jason tells Liz he didn’t say anything. Jason tells Liz he’s not going to lie to Jake about his feelings for Franco. Liz says she is doing this for Jake. Jason doesn’t want to be the kind of father that lies to his kid. Liz says Jason is disrespecting her and Franco.

Jason tells Liz even if Franco has changed; it doesn’t change the pain he caused. He asks what is going to happen when Aiden Spencer (Jason David) finds out that Franco kidnapped him. Liz wants Jason to give her a little credit and leaves for work. Cameron Webber (William Lipton) arrives to pick up Jake and Jason asks his opinion of Franco. Cameron says they don’t always get along, but he has been good to Liz and the boys.

General Hospital’s Cameron and Franco meet with Kim Nero (Tamara Braun) to get the paperwork to transfer the car to him. Franco suggests Kim try art therapy. Kim says she is in therapy but needs a favor. She wants Franco to be there for Drew. Drew needs to let his feelings out. Kim goes to check on a patient and runs into Liz at the hospital. Kim tells Liz that she crossed the line in trying to get pregnant. Kim says being around babies bothers her, and she suggests leaving town. Franco sees Liz at the hospital and tells her about the psychics warning.